December corn futures shed 6-1/2 cents this week to close at 517-1/2. The USDA September world agriculture supply and demand estimates (WASDE) released today brought little to no surprises to the market, as most estimates fell within the range of pre-report estimates. The USDA using FSA data revised corn planted acres up about 1% to come in at 93.3 million acres. Using about 8,000 farmer surveys, 4,000 objective yield samples (across corn, cotton, and soybeans) and satellite imagery through the end of August the USDA estimated 2021 US corn yield at 176.3 bushels per acre. This was a 1.7 bushel per acre increase from the August yield estimate. With an increased carry in from the 2020/2021 marketing year ending stocks for the current 2021/2022 marketing year were raised 166 million bushels. All of these increases were mostly expected by the trade going into the report. With the market at already oversold levels, the lack of more bearish numbers, than what was expected, moved the market higher on Friday.

China has lowered its 2021/2022 estimates for consumption of corn used for animal feed as hog prices stay low, the agriculture ministry said on Friday. China’s 2021/22 feed consumption for corn was seen at 187 million tons, down 3 million tons from August’s forecast. Feed producers reduced the use of corn as alternative grains, such as wheat and rice, had obvious price advantages versus corn. The ministry raised its estimates China’s 2020/21 corn imports by 4 million tons, to 26 million tons, on significant rise in U.S. shipments.

Soybeans lower this week despite being 18 cents higher Friday

November soybean futures lost 5-1/2 cents this week despite a rally back Friday to settle at 1286-1/2. The USDA WASDE numbers released today by the USDA were mostly in line with pre-report estimates. The national soybean yield for 2021 was estimated 0.6 bushels higher than the August report, estimated to come in at 50.6 bushels per acres. Yield estimates for Minnesota’s soybean crop jumped over 9% from the August estimate. The Delta region also saw some notable increases. The one “shock” of the report came from certified FSA data. Harvested acres for soybeans came in nearly 300,000 acres below previous estimates. Changes were mixed throughout the Midwest, but the mid-South and Delta saw some notable decreases from the June estimate.

World soybean ending stocks saw a notable rise from last month estimates. Increased carry in from the 2020/2021 marketing year and an increase in US production for this marketing year brought world ending stocks for the 2021/2022 marketing year up to 98.89 million metric tons. This is a 3.8 million metric ton jump year over year and would be the third highest ending stock level ever if realized. After trending lower over the last two months the soybean market was oversold, today’s numbers while not bullish by any means, were enough to rally the market slightly from these oversold levels.

All three wheats lower this week

Spot Cheese Up Each Day This Week

Cheese buyers extended the up streak in cheese to six days in a row, as demand has been strong so far in September. This week, the spot cheese block price tacked on 5.50c while the spot cheese barrel price gained 8.50c. The fact that the barrel price is gaining on the block price is bullish, as the wide spread is starting to narrow some. Despite this cheese market surging higher, the class III market had a sluggish week of trade. Steady gains were seen in October milk (+49c) and November milk (+20c), but the further out contracts were neutral. The market may look for a catalyst elsewhere or may be waiting to see if this cheese rally has legs, or if it will fizzle out like recent moves.

The class IV trade remains consistent in the fact that buyers are pushing the market higher. A recent multi-year high in US spot powder along with good gains in the Global Dairy Trade class IV product market has supported prices. The October ’21 class IV milk futures contract is currently $1.27 per hundredweight off of its July low. Current market movers for dairy include what the feed market will do over the next couple months, whether or not production growth can tighten, how slaughter rates look, and whether or not exports can keep the same pace. 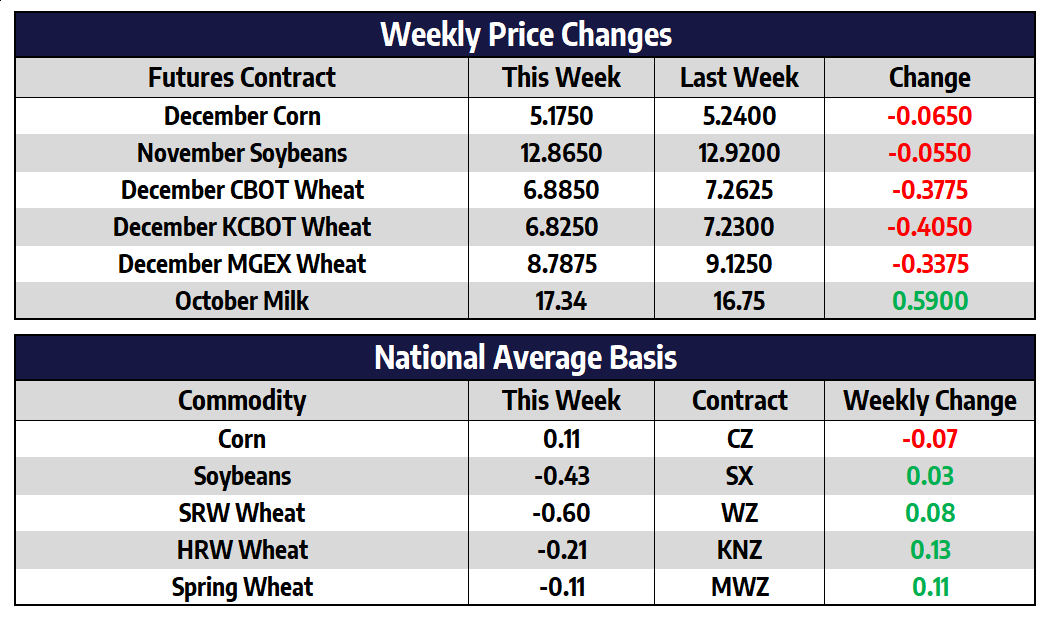