The dairy market got a surprise on Monday night when the USDA announced they would be purchasing products for a fifth round of the Farmers to Families Food Box program. Futures locked limit up on Tuesday and continued to push higher throughout the rest of the week, rallying on the news. The February 2021 class III contract jumped an impressive $2.19 this week while March added $1.57. The market expects that the government will do a large amount of cheese buying on the open market as part of this program. In 2020, the government helped push cheese prices to a new all-time high as a result of some of the Food Box program buying. Cheese prices added 18.875c this week. 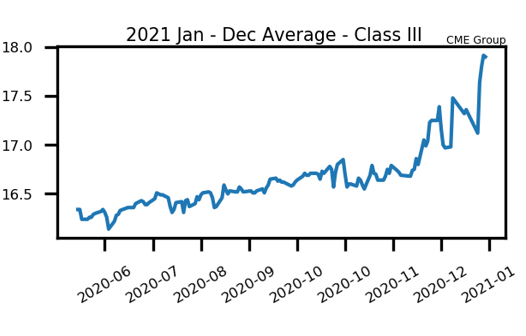 Corn futures finished green in three out of the five trading sessions this week. This took the market up 12.25c to post a $4.9625 per bushel close on the March 2021 contract. The market briefly was able to push over the $5.00 resistance barrier during the middle of the week, but was never able to close over it. This is a level that contracts could look to test again during next week’s trade. Some news this week include the fact that Argentina’s early planted corn is rated just 15% good to excellent. South American weather remains a concern, with 85% of Argentina planted. Also, Argentina is debating whether to lift its corn export ban. China corn prices continue to soar higher and the U.S. Dollar continues to weaken, both adding support. 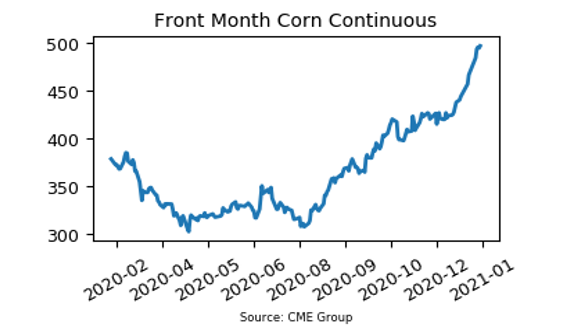 Argentina is debating whether to lift their corn export ban

15% of the Argentina corn crop is rated good to excellent

The front month corn contract tested the $5.00 per bushel level this week

The front month March 2021 soybean meal futures contract gained another $10.20 this week in total to post a $439.60 per ton close. This was the fourth straight week the market finished green. The highest price for the week was $444.10, which was soybean meal’s best level since June of 2014. The weekly export sales this week for beans was on the weaker side, but the market brushed it off and continued higher. The market is expecting the USDA to revise higher United States soybean exports on the WASDE report next week. They also could reduce Argentine soybean production and United State ending stocks. There was an export sales notice on Friday of 204,000 metric tons of soybeans for delivery to China during the 2020/2021 marketing year. 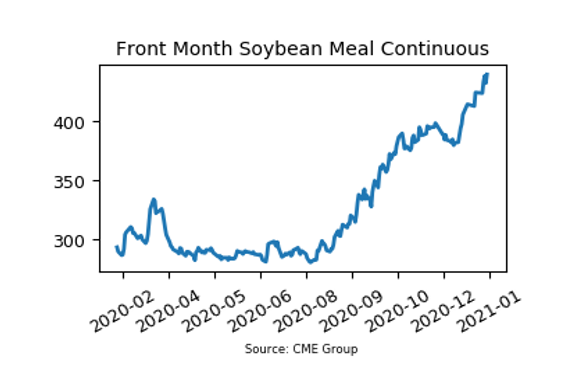 All eyes are on next week’s USDA report to see if the USDA cuts U.S. soybean ending stocks 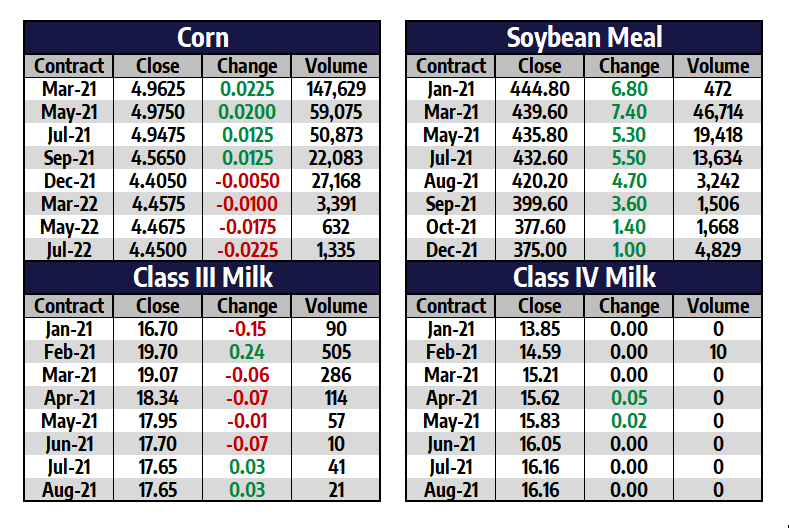