The CME and Total Farm Marketing offices will be closed Monday, January 17, 2022 in observance of Martin Luther King Jr.

Class III milk capped off another volatile week with the February contract closing at $22.08, up 65 cents on the week. Futures traded within a nickel of the $23.00 mark on Thursday before turning lower. After finally breaking out of its long-term range last week, the block/barrel average traded within a few cents of $2.00/lb earlier this week before closing at $1.94/lb, up just a penny from last Friday. Whey prices pushed to a new all-time high of $0.77/lb and has posted just one lower weekly close out of the last 19 weeks. Class III milk is in a bit of a no-man’s land after pushing above the $20.00 mark and, while producers should remain mindful of the downside potential from these levels, a move near the 2014 and 2020 highs is still possible. 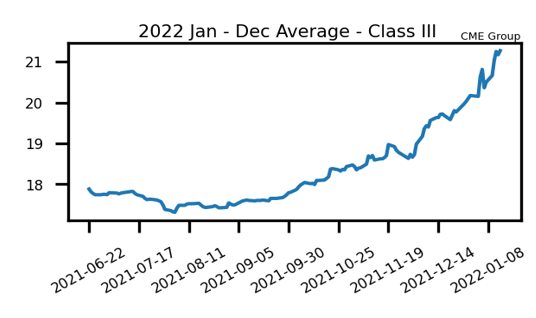 March corn futures closed a little more than a dime lower this week and are back beneath the $6.00 mark, closing at $5.9625. The main focus this week was on the January WASDE report released on Wednesday which showed 2021/22 US ending stocks at 1.540 billion bushels, up from 1.493 bb last month. World numbers were posted at 303.07 million metric tons, down from 305.54 mmt in December. For what is historically the most volatile report of the year, it was largely a non-event. The market is in a bit of limbo with comfortable domestic supplies battling with lower world numbers and a continued focus on problem areas in Brazil and Argentina. It appears that Argentina is the worst hit with the Rosaria Grains Exchanged pegging production at 48 million metric tons compared to the USDA estimate of 54 mmt. 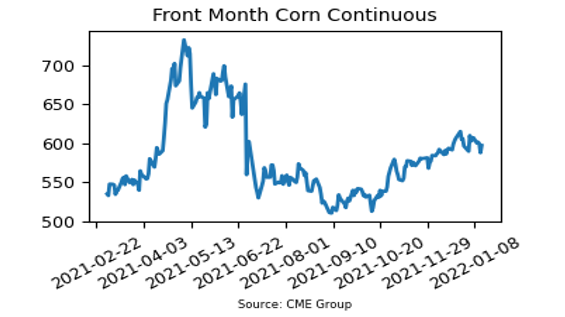 Soybean Meal Lower on Inside Week

March soybean meal futures finished the week $19.40/ton lower at $405.60, but hung within last week’s trading range. Wednesday’s report had 2021/22 US ending stocks at 350 million bushels, up from 340 mb last month. This is a big shift from the summer months when estimates were closer to 100 mb. World ending stocks were estimated to be 95.20 million metric tons, down from 102.00 mmt in December. This is a large shift and this number could shrink as the poor weather in Argentina continues. The Rosario Grains Exchanged estimates the Argentine crop to be at 40 mmt vs. the current USDA estimate of 46.5 mmt. Regardless, the market may have run out of buyers around the $420/ton mark and could be do for some retracement lower. 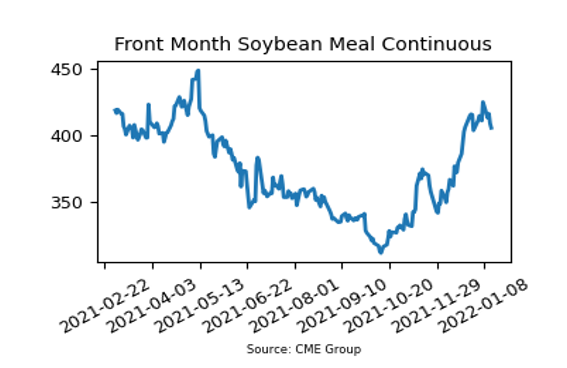 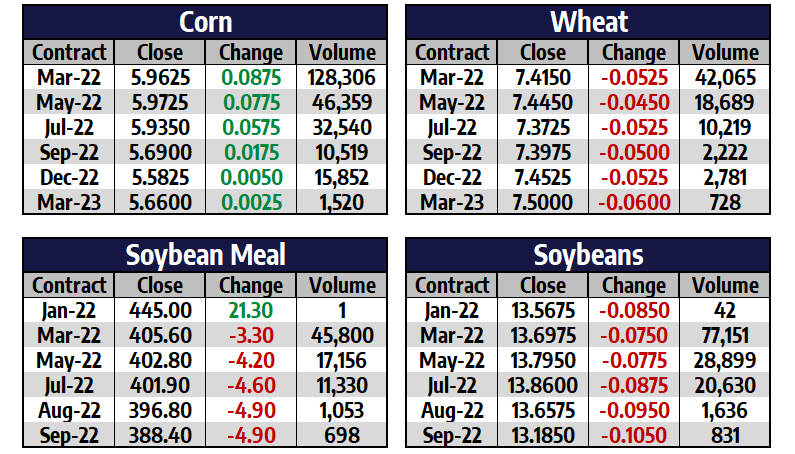