Dairy Market Wakes Up On Friday

A number of report data that was released late Thursday and early Friday helped to push the class III milk market higher on Friday. Futures recovered a good chunk of what had been lost in recent sessions, with March 2021 adding 63c to $16.64 and April 2021 up limit (75c) to $17.12. Export data showed butter exports up 115% from a year ago with whey exports up 27% from a year ago. Cheese exports were down just a percentage point from last December. Additionally, a Dairy Products report showed that cheese production in December had increased just a half percent from what was produced a year ago. Cheese buyers returned to the spot trade and bid blocks up a whopping 10.50c on Friday, while barrels added 5.50c. 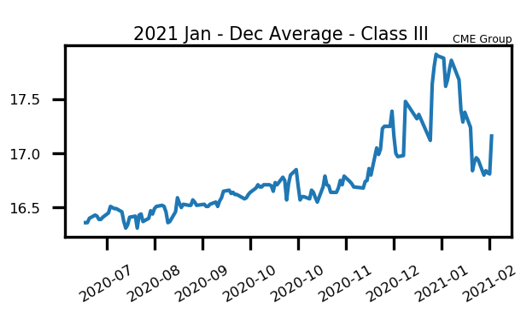 The Global Dairy Trade market added another 1.80% this week, putting it up 6 events in a row

Quiet Week of Trade For Corn

Corn futures traded in a really tight trading range this week when compared to the last few weeks. Overall, the front month March 2021 contract added 1.50c to $5.4850 per bushel. The market closed red in three out of the five trading sessions. Contracts appear to be consolidating a bit awaiting fresh news to break the market higher or lower. Next week Tuesday’s WASDE report could provide the catalyst to determine trend moving forward. The weekly export sales report showed corn exports at a record high 7.436 million. Chinese stocks are lower as well, which indicate corn should continue higher. Going into next week, Argentina will be experiencing some dry conditions that could raise a little crop stress. 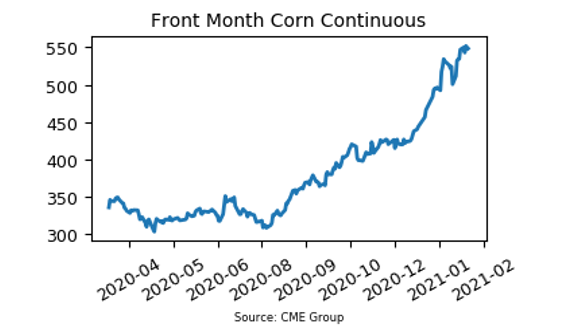 Corn futures last traded below $5.00 per bushel on January 25th

Argentina weather will be watched closely next week, as some dry weather could raise crop stress

Similar to corn, the soybean meal market traded in a tight sideways range this week. The front month March 2021 contract fell $0.50 per ton overall to $430.50. Despite all of the planting and harvest delays, Brazil is still expecting a record crop. This could be weighing on prices a bit. Although, next week’s WASDE report could provide a catalyst for the bean market to push either higher or lower out of this consolidation. Some areas of Brazil may get too much rain in the coming days, but it might not make a large impact. In Brazil, there are 11 million tons of vessels currently waiting to load soybeans. Trade guess for the WASDE report next week is for the USDA to lower ending stocks for the US from 140 mb to 123 mb. 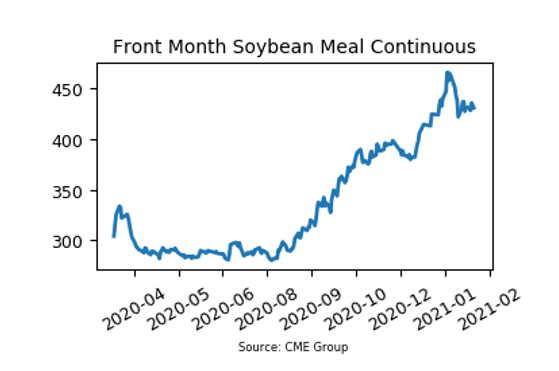 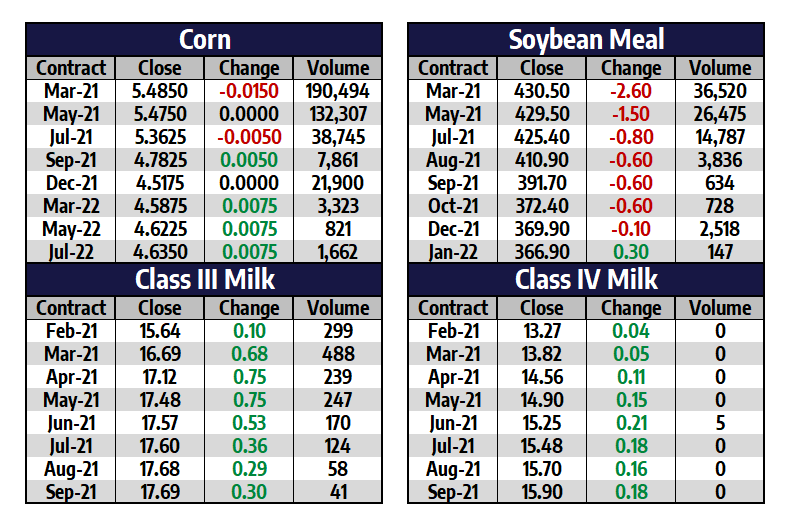