After yesterday’s strong push to the topside, many commodities fell back to end the week and milk was no exception. In the Class III trade, the soon-to-be second month April contract closed 38 cents lower Wednesday, limit up 75 cents yesterday, and 75 cents lower today which was 18 cents off the daily low with expanded limits. Along with the heavy losses in the feed markets, the spot market added to the pressure. Spot cheese closed 6.1250 cents lower at $1.9225/lb, failing again just beneath the $2.00/lb mark. This totals 3.8750 cents lower on the week after entering Friday’s trade higher. Spot whey was unchanged at $0.78/lb today but is down 3 cents on the week. While the outside markets certainly add to the volatility, the Class III complex has clearly struggled at $23.00 milk on the second month at $2.00/lb in the block/barrel average so far through two months of the calendar year.

Class IV action was mixed across the board with March futures up 24 cents and April and May down around 40 cents. The Class IV 2022 average finished the week at $22.63, roughly 14 cents beneath the high from 2/15 and up 35 cents on the week. The spot trade saw butter drop 10.25 cents this week with 7.50 cents of that coming in today’s trade, finishing the week at $2.5875/lb. This mark is 13.50 cents above the low for the year and 34.75 cents beneath the 2022 high. Spot powder was up a penny on the week at $1.86/lb. Despite the volatility in the butter trade, Class IV futures have hung in well after a push to an all-time high on the second month chart and have the fundamental ammo to stay afloat for now. 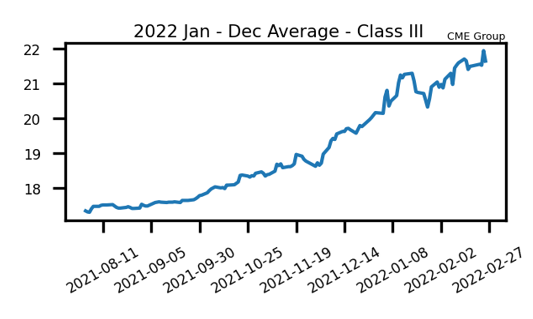 To state the obvious, the commodity markets were anything but unexciting this week in large part due to the breakout of war between Russia and Ukraine. On news of the invasion, May corn futures traded to $7.1625 early in Thursday’s trade, bringing the continuous chart within 60 cents of the high from last May, but closed out Thursday at $6.9025 before falling 34.50 cents today to finish at $6.5950. After the dust settled, the May contract was just 3 cents higher on the week with new crop December falling 18 cents. In many cases, a reversal like that would have every bell going off that a high is in but with everything going on around the world plus the fact we will soon be nearing the domestic planting/growing season, it’s impossible to rule more volatility out. That being said, US corn prices remain very over-priced vs. current supply/demand fundamentals, but the fact that Ukraine is responsible for roughly 17% of the world’s corn exports is of course going to lead to some increased demand optimism. There was a rumor that Russia did promise China the Ukrainian-sourced corn they were due if a takeover occurs. 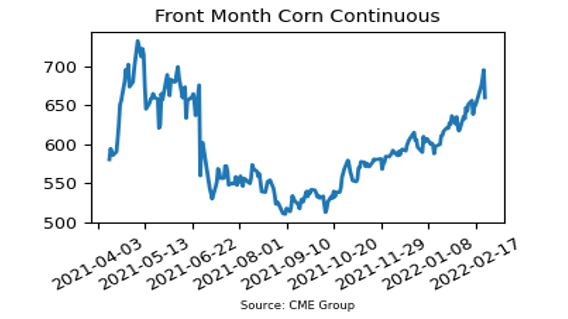 Compared to corn, wheat, and the energy markets, soybeans and soybean meal do not have as direct of a connection with the Black Sea region but the other element of the complex, soybean oil, certainly does with the alternative products that come out of that part of the world. Soybean meal did not miss out on the Wednesday night/Thursday morning action, trading $21.00/ton higher at one point to an eight-year high of $487.00 before finishing Thursday afternoon at $455.60. Today’s action saw a sharp drop to $442.70. This totals a loss of just $3.00/ton on the week but is well of the high. In South American news, The Buenos Aires Grains Exchange lowered their rating for Argentina’s soybean crop to 24% good-tp-excellent, down from 31% last week. While the complex is looking like it may be over-extended to the topside, expect some back-and-forth action to persist. 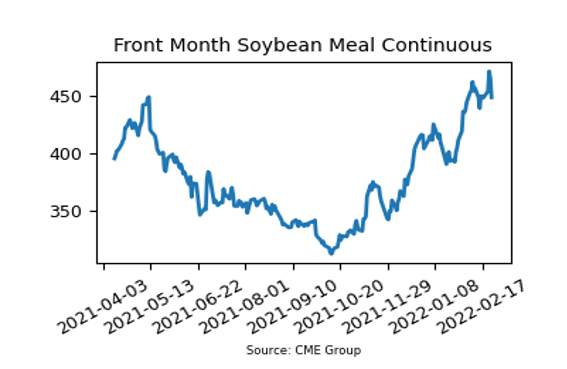 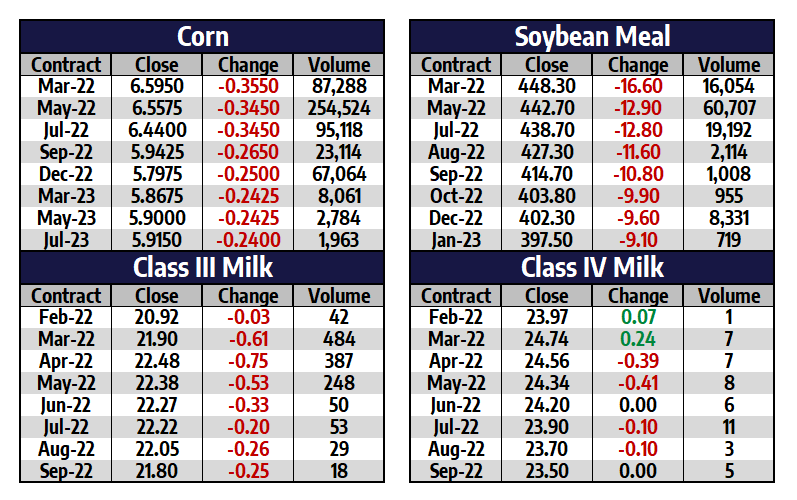