Within the Class III market this week, the second month April contract finished 30 cents higher but 86 cents off its weekly high. The deferred months saw some good buying to end the week and the overall calendar year average added 22 cents Friday for a weekly total of 42 cents, closing at $22.90. Spot cheese put together a solid week with 4 cents of gains and a close at $2.10/lb, off a bit from its 16-month high of $2.15875/lb posted on Wednesday but still hanging above $2.00/lb for now. Spot whey closed out the week unchanged at $0.7575/lb, a mark that has now held for six trading days. Some midweek weakness was not a huge surprise, given the recent rally and the fact most contracts finished higher on Friday despite a 5.125 cent fall in cheese was a good sign.

Over on the Class IV side of things, every contract closed out Friday higher with the exception of the front month contract. The second month chart was 4 cents lower this week as price action has leveled off at all-time highs. The calendar year average, however, pushed to a new high today at $24.40, 18 cents higher on the week as the deferred months continue to see strength. For the week, spot butter was 2.50 cents higher with a close at $2.71/lb, continuing the wedge formation it has formed throughout 2022 so far. Spot powder dropped 3.25 cents this week with a $1.84/lb close. The market was supposed to get January export numbers on Tuesday, but the USDA still states they are having technical difficulties but we will pass on that information when we get it. 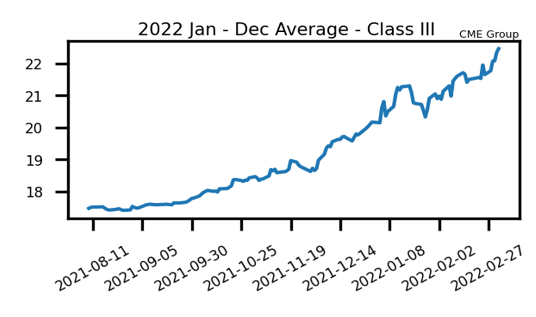 Front month May futures added 8.25 cents on the week with a close at $7.6250, staying beneath last week’s high but obviously posting a new weekly close for the move. New crop December futures were up 25.75 cents on the week with a close at $6.5525, ending the week strongly with a new contract high. While questions persist on what will happen with Ukrainian corn waiting to be exported and corn hoping to be planted in the coming months, there was a pickup in ship movement leaving the ports in Russia this week which calmed some nerves. That being said, there is no end to this conflict in sight at this point and as we near the US planting and production season, the volatility likely will not be going anywhere. 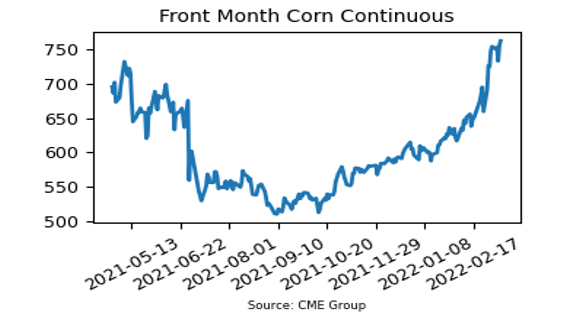 May soybean meal futures closed out the week at $477.10, $16.70/ton higher on the week and a push to levels not seen on the front month contract since 2014. Brazil’s CONAB lowered their estimate for the country’s soybean crop to 122.770 million metric tons, down from a previous estimate of 125.471 mmt and down from 138.153 mmt last year. This compares to the USDA estimate of 127.00 mmt, which was updated this week and is down from their estimate of 134.00 mmt last month. Future export optimism, along with the overall bullish commodity trend at the moment, has kept the soybean complex at multi-year highs. 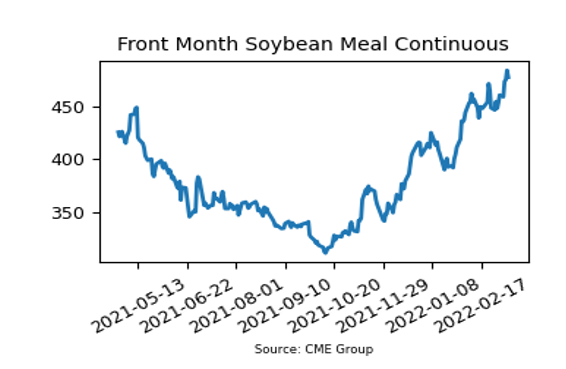