Dairy Rebounds Late in the Week

Class III milk futures had an up-and-down week as commodity market pressure and the spot cheese trade have kept price action volatile. The commodity market ran into some selling pressure earlier in the week on talk of a ceasefire between Russia and Ukraine. There was speculation they could be headed towards a peace agreement. At the same time, cheese sellers were getting aggressive and cheese buyers were nowhere to be found. The block market was down a total of 14c on Tuesday and Wednesday combined while barrels fell 5c over that stretch. It had looked at the time like spot cheese was on the verge of losing the $2.00/lb level. By week’s end, commodity pressure eased and cheese buyers returned to buy 8 loads of blocks and 16 loads of barrel cheese. This put the block/barrel average back up to $2.08/lb at week’s end.

The USDA will release the February 2022 milk production report next Monday followed by the monthly cold storage report on Wednesday. It could be another volatile week of trade as the market digests this data. Recent data has shown a steady drop in US cow numbers since the May 2021 peak along with tighter production across the country. Cheese inventories have been steady to higher while butter inventories have been steadily on the decline. There will also be a lot of eyes watching to see if spot cheese can hold over the $2.00/lb handle. The powder and butter spot markets have cooled down in recent weeks. 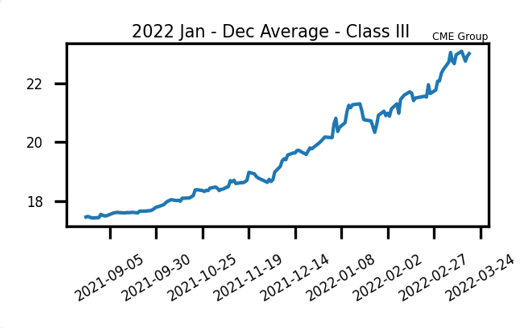 Corn Futures Take a Step Back

The May corn futures contract fell 20.75c lower this week, snapping a streak of five consecutive up weeks. There may have been some profit taking or farmer selling this week in case there is a ceasefire over the weekend. Although as of now, shelling continues in Ukraine. The longer this war goes, the less likely the Ukrainian farmer will be able to get out in the fields and get their crops planted. Also, about 70% of their diesel fuel comes from Russia and Belarus. The market is still concerned that possibly 15 mmt of corn may not get shipped out of Ukraine – which could drive additional demand to the US. Managed money is estimated to be net long about 354,000 contracts of corn. The next report that could bring volatility to the grains is the March 31 Perspective Plantings report. 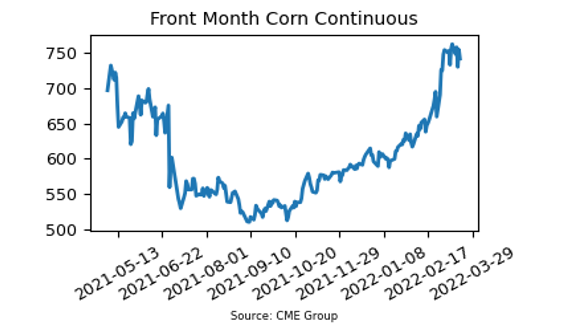 With front month soybean meal on the brink of reaching the $500 per ton level, the market ran into some resistance this week and held mostly steady. The front month May contract dropped $0.10 and closed at $477 per ton, after hitting an intraweek high of $491.60. There is talk that some Ukrainian corn acres will be switched to soybeans and sunflowers. Although for now Russia has continued shelling in Ukraine. There is also talk that China’s economy could take a hit due to another round of covid outbreaks. United States soybean export sales are 46.00 mb, which are the 2nd largest on record for this time period (through the 2nd week of March). The lower South American soybean supply keeps support across the US bean trade. 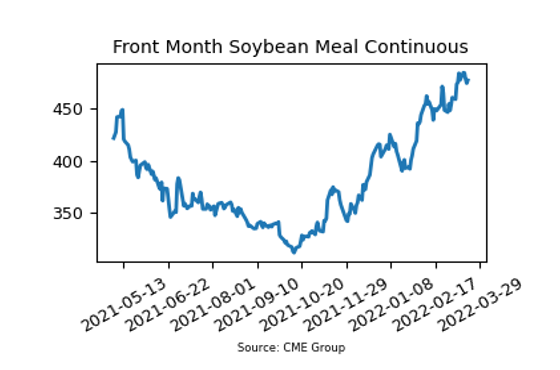 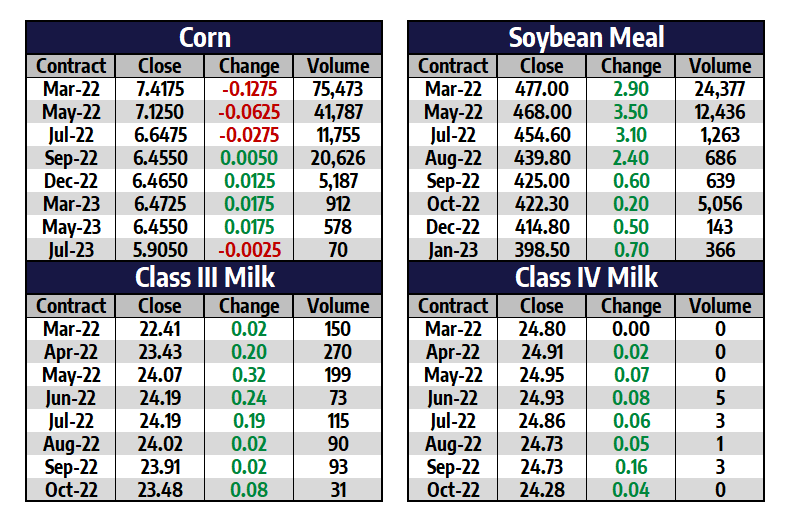