With only four trading days this week, the dairy markets finished the week strongly as the Class III 2021 average is once again approaching its all-time high of $17.92 with a close of $17.79 on the week. Every product in the spot CME spot trade finished the week higher. The biggest winners of the week were the fat complex as butter and cheese both had strong gains on the week. Butter finished at the highest price for 2021 so far at $1.845. The recent breakout over $1.70/lb has opened the door to the next level of resistance at $2.00/lb. Cheese prices gained 5.25 cents on the week to finish at $1.64375/lb. Prices will still need to break over the March high of $1.67/lb to confirm a breakout higher. Whey once again finished at a new all-time high for the CME spot whey market at $0.66/lb this week as the market accelerated in velocity higher this week. Powder is once again at the upper end of its rangebound trade from $1.15/lb to $1.20/lb and a break out over $1.20/lb could set the precedent for higher prices soon. 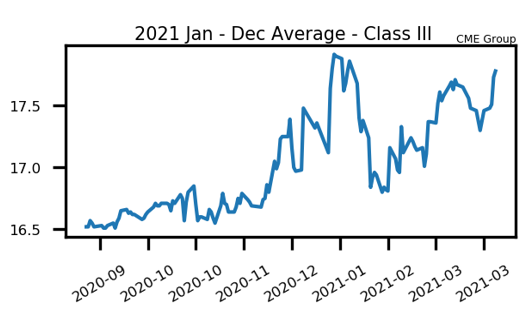 The spot whey market once again finished at all-time highs for the electronic spot trade at $0.66/lb

The spot butter market finished the week at a multi-month high of $1.8450/lb

Corn Struggles After The Limit Up Day

After the corn market shot limit higher within 60 seconds from the release of the USDA Prospective Plantings report on Wednesday, the market stayed locked limit the rest of the day. When contracts re-opened last night, corn had gapped higher by 10.75c and pushed up as high as $5.85 on the May contract. The momentum couldn’t be sustained during the rest of the day on Thursday, though, and the May 2021 contract ultimately finished 4.50c lower to $5.5975 per bushel. For the week overall, corn added 7.25c, aided by the limit up movement on Wednesday. Within the Prospective Plantings report, corn acres came in at 91.10 million, versus trade expectations of 93.10 million. Additionally, March 1 stocks were 7,770 million bushels versus 7,767 million bushels expected and 7,952 million bushels last year. The markets are closed tomorrow for the Good Friday holiday. 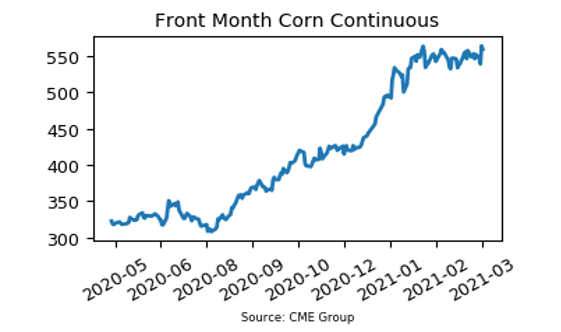 Soybean meal futures worked lower at the start of the week heading into Wednesday’s Prospective Plantings report release. Like the rest of the grain trade, the soybean meal market finished limit higher, adding $25 per ton. On Friday the market gave back a good chunk of those gains, though, with the front month May 2021 contract falling $13/ton to $410.20. This puts soybean meal up just $6.20 for the week. In the report, the USDA said 2021 soybean acres will come in at 87.60 million acres. This was well below pre-report estimates of about 90 million acres. The USDA also said March 1 soybean stocks were 1.564 mb, versus trade guesses of 1.561 mb. There was a good amount of selling pressure on Thursday after Wednesday’s rally. Monday’s session will be interesting to see how the market reacts after an extended weekend to digest the data. 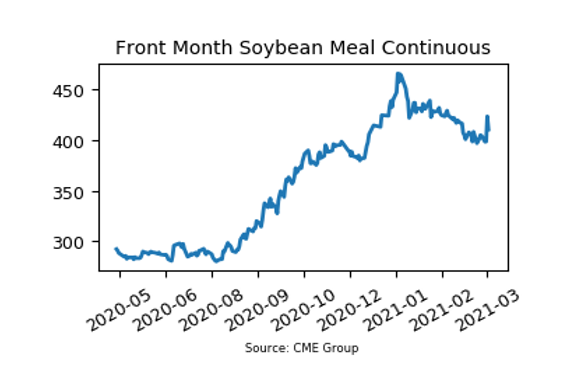 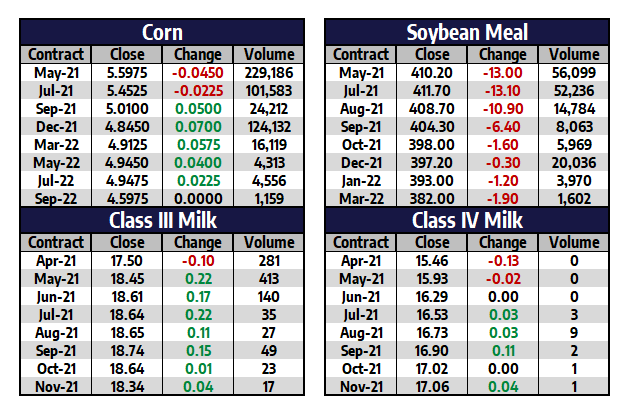