The dairy markets finished the week with three up days and two down days this week as prices continue to weigh a balance of different factors. We received two important fundamental reports this week with milk production and cold storage. Both of these reports looked to be bearish as milk production finished just above trendline production growth at 1.8% YoY. Milk production numbers weren’t overly bearish but the cold storage report was one of more concern. Growth of cheese in cold storage came in at the highest levels since 2019 at 7% growth YoY. Milk futures finished the week at strong levels with May through August of Class III all finishing above $19.00/cwt. Class IV continues to make decent gains as the spread in the market between Class III and Class IV shrinks the further into 2021 you go. While spot market prices were mixed this week the surge in grain prices this week also keeps an artificial level of support in the market. Price action in the whey spot market looks toppy as prices slammed lower from 70 cents to 62 cents. 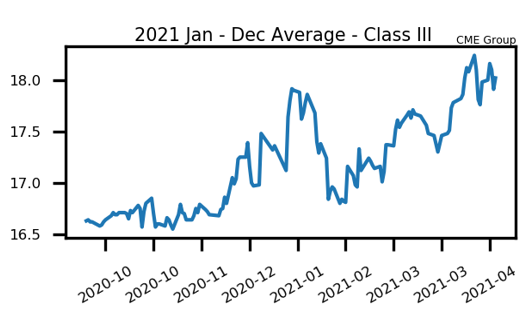 Class III milk had several contracts finish at or over $19.00 this week while the highest class IV contract closed at $17.40

The high feed costs are helping to support higher milk futures. Milk production is expected to taper off if feed costs stay this high

The front month May 2021 corn contract soared higher all week, posting five up sessions in a row and adding 70c total. By week’s end, the contract closed up at $6.5550 per bushel. The funds are net long over 550,000 contracts of corn. Matif corn futures are making 8-year highs while there remains stress to Safrinha corn in Brazil, which is expected to get even worse. Heavy rains are expected for the Eastern US corn belt next week, which could slow planting. However, some rain will be necessary to keep conditions from being too dry in parts of the corn belt. Meanwhile, Argentina’s crop weather is expected to be positive for the next 2 weeks. The Dollar fell over 72 points lower this week, adding some support to grains. 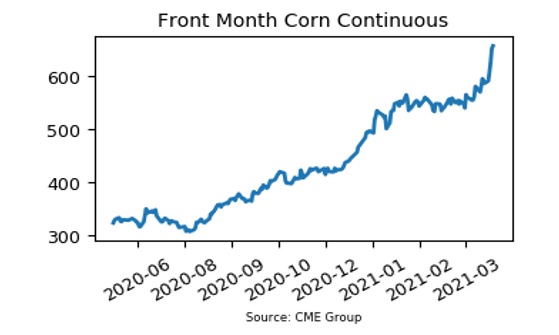 Soybean Meal Adds Over $20 This Week

The front month soybean meal contract had its biggest weekly gain since the week of January 11th. During this week’s trade, the May contract added $20.20 and finished up at $422.40. Prior to this week, soybean meal had been chopping around the $400 per ton threshold, but now after this week it has distanced itself from that barrier. A strong week overall in the row crop futures along with a weaker US dollar helped support. The funds are net long 219,000 contracts of soybeans and added to that this week. Surging vegetable oil markets helped push the soybean complex higher this week. With increased volatility, the CME has raised margins on grains. There continue to be positive US crush margins. 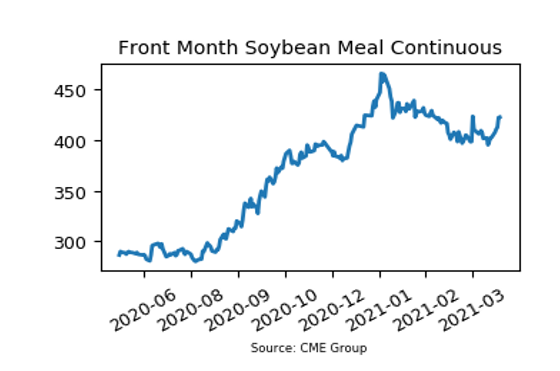 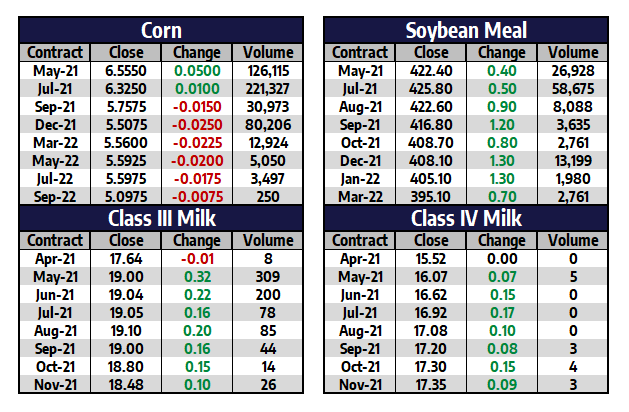