Class III futures were two-sided today with the calendar year average falling a penny to $23.21, down 15 cents on the week but up 17 cents for the month. The second month May contract closed a dime lower this week as it shifts to the front month, finishing April down 2 cents overall. While the short-term trend has turned down over the last couple weeks, this month brought a new all-time high for the second month chart and plenty of good hedging opportunities for milk producers. Spot cheese fell 2.6250 cents this week with a close at $2.3550/lb and is still hanging near its recent high. The possible seasonal pressure for milk, the higher trend in the dollar, and the ebbing of global dairy product prices may leave the market on the defensive entering the new month.

The Class IV trade was mostly higher today with the calendar year average jumping 7 cents to close the week at $24.09, representing a 15-cent fall this week and a 42-cent drop for the month. April was the first month in 9 months that the second month Class IV contract closed lower, and also breaks a streak of 7 higher monthly closes for the 2022 average. Today, the second month chart was unchanged but the June through November contracts all caught some higher bids, but volume was light. Spot butter closed out the week less than a penny higher at $2.6750/lb and while it has yet to fall out of bed, gave some evidence of bearish technical action this week. Next week is a busy week for fundamental reports with a GDT Auction on Tuesday as well as March US dairy exports and Dairy Products Production on Wednesday. 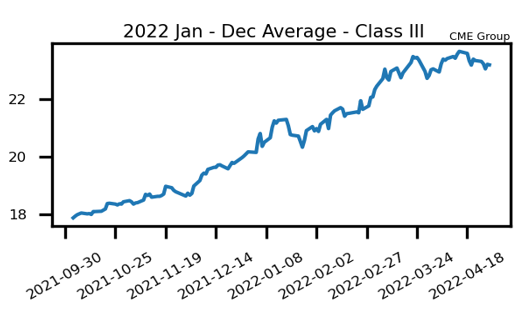 Corn Closes Back Over $8/bushel

The front month corn contract added 25.25c this week as demand for corn remains high across the globe. Inflation is keeping food prices reportedly up 31% in 2021 and are forecast to be up 23% in 2022. With US planting progress at just 7% complete for corn compared to the five-year average of 15%, the bulls hold control of futures. Between now and May 6, the Midwest forecast is very wet. This could slow planting further which could reduce planted acreage and yield. China buying 1 mmt of US corn this week may suggest they are replacing corn they were supposed to get from Ukraine. The Buenos Aires Grain Exchange reported 19% of Argentina’s corn crop was good to excellent with 25% harvested. High fuel prices continue to support corn as well. 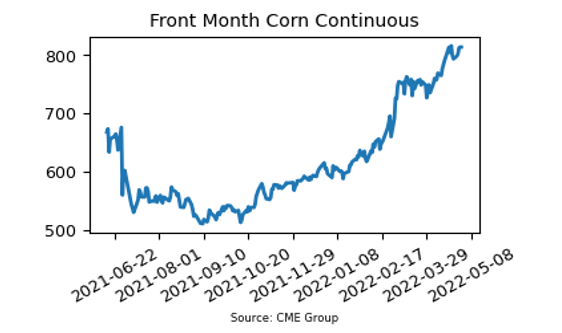 Soybean Meal Breaks to the Downside

Front month soybean meal futures this week were down $18.30 per ton and closed lower for the third straight week. May bean meal finished the week at $440.50 after topping out at $494.70 back in late March. The Buenos Aires Grain Exchange reported that only 16% of Argentina’s soybean crop was rated good to excellent with 46% harvested. There is anticipation that US soybean exports will increase possibly another 100 mb, with US competitive vs Brazil. The slow start to the planting season in the US is keeping a bid under the bean trade. 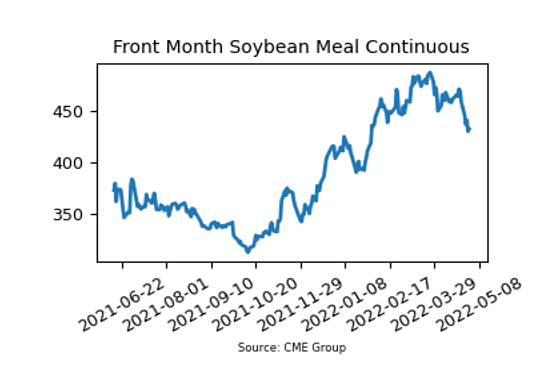 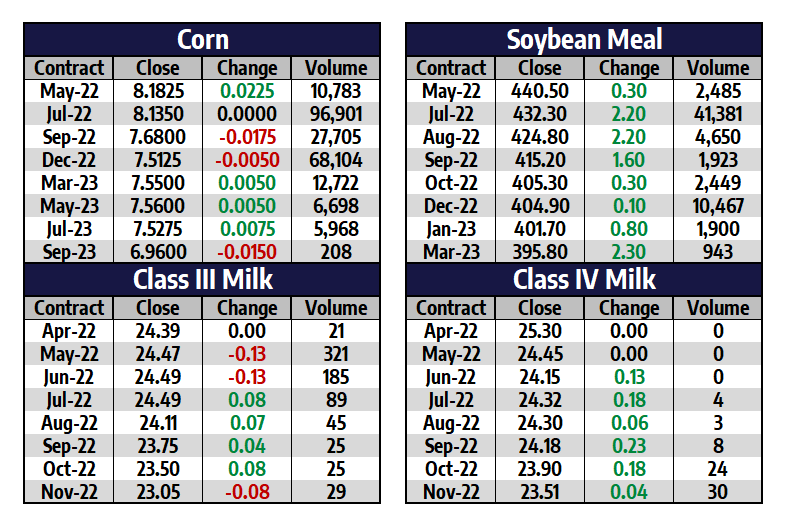