Dairy markets struggled this week as every product on the CME’s spot trade was unable to finish higher on the week. The biggest loser was the cheese market, as the block/barrel average dropped 6.875 cents. This drop lower was primarily driven by the barrel market as barrels traded 13 cents lower this week. Last week we mentioned that the current spread between blocks and barrels could be a concern for the market as barrels are very rarely at a large premium to blocks. This week we saw the spread unravel with barrels only holding a 5 cents premium over blocks vs. 17.25 cents a week ago. Whey, butter, and non-fat powder price all look similar recently with extended rallies earlier in the year now consolidating lower over the past few months. There is still the potential for these products to break out of their recent downtrend higher if global prices remain steeply higher than current domestic prices.

This week saw large drops in commodity prices across the board that were impacting the milk market. Seasonals still hold that there could be a bounce at some point between now and July. Short-term indicators look oversold at the moment. That being said, a July to December average at $17.88 is still above average for the year a premium in the deferred contracts shows that the market believes there could be an additional upside to come in the spot markets at some point. The milk production report originally to be released today was delayed by the USDA in observance of Juneteenth.

The demand for dairy products seems to be low right now, which isn’t unusual for this time of year

The Q3 2021 milk average is down $1.18 so far this month, reinforcing why marketing milk and protecting risk is so important

The corn market had an up-and-down week of trade this week and had a limit down move throughout the process. July corn opened Monday lower and finished down 25.25c on forecasts calling for wetter and cooler conditions over the next two weeks. After pausing on Tuesday and Wednesday, the market then was slammed limit lower on Thursday with July corn down 40c to $6.33 per bushel. The market was again pressured by timely rains in the Corn Belt along with a strong recovery in the US Dollar. Friday’s session saw buyers find value after the sell-off, taking corn back up 22.25c to $6.5525 by week’s close. After all of that, corn futures were down 29.25c this week and more rain looms in the forecast. The market will be watching to see if the rain materializes over the weekend and will also want to see what the USDA does with crop ratings on Monday. 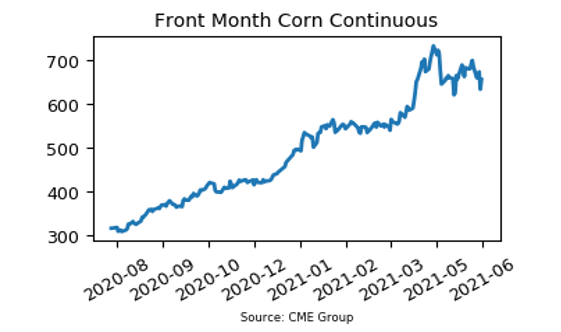 In the five trading session this week, the front month soybean meal contract hit new lows for the year four different times. The market has struggled while soybeans and soybean oil futures have both remained under heavy selling pressure. By week’s end, the July soybean meal contract closed down $9.90 per ton to $373.40. Rains forecast for Iowa and Minnesota initially brought sellers to the market earlier this week, but totals were disappointing last night. This, along with the fact that the market was heavily oversold, saw buyers return to the market on Friday and bid soybeans up 66.25c while bean meal added $11.90. The weekend weather forecast will be the key here, with the market watching closely to see how much rain comes. Crop ratings next week will be interesting as well. 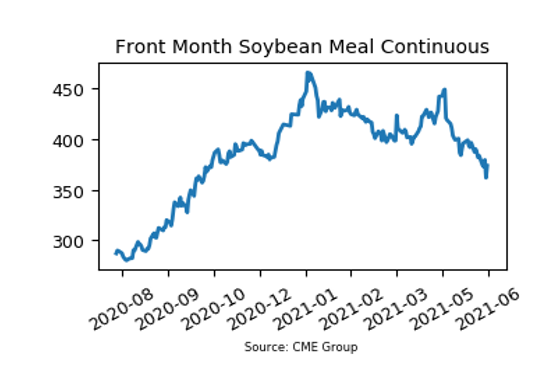 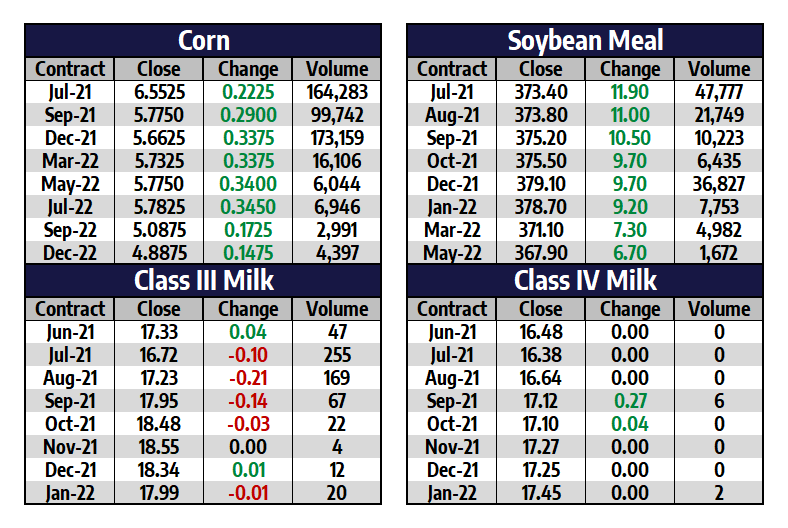