The dairy trade has been dominated by the downturn in the spot cheese trade recently as the market pressed into the lowest prices of 2021. After breaking into new lows cheese buyers have come in to support the market back above what is seen as critical support of $1.48/lb. The market finished at $1.49375/lb as the weekly close held support. Upside movement would look supportive that a short-term bottom may be in for the spot cheese market. Despite the spot cheese market trading to new lows, the futures market has remained relatively stable as the market seems to expect some seasonal strength to come into the market as we push through the summer.

After the market close, the USDA released the Milk Production and Cold Storage reports. Milk production in June was up 2.90% from the same month last year, which was a bit surprising to see. This number could be friendly to prices. Production growth in May was up 4.70% and April was 3.50%, so seeing a number south of 3% was interesting. Milk cows on farms in the United States fell 1,000 head from May to June down to 9.508 million head. Compared to the same month last year, cow numbers are up 153,000 head. The monthly Cold Storage report showed that total cheese in storage was up 1% from a year ago and down 2% from last month. 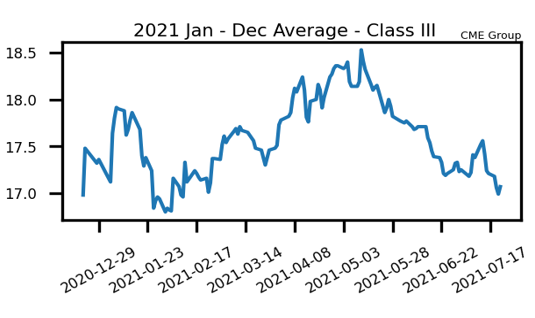 Corn prices closed out the trading day with losses of around 17 cents, bringing the September contract to $5.4725. That contract totaled less than a dime lower on the week, however, as the market continues to bounce around in its recent range. The Sunday night market opens are often interesting around this time of year following a weekend of shifting weather forecasts, but in addition to a general feeling that the overall crop is in decent shape, demand has continued to slip which gives the market somewhat of a heavy feeling. The September contract has found support in the $5.20’s multiple times in the last two months, so watch for how the market reacts on an approach to that level. 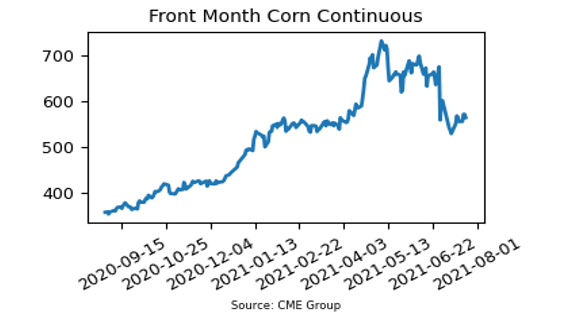 The August soybean meal contract ended the week with losses of $9.60/ton today, which matches its total loss for the week. Prices have spent most of the last 5 weeks oscillating between $350 and $370/ton, outside of a short-lived push up near $390/ton after the 6/30 report, and with the news this week of China expecting to cut their soybean/soybean meal import demand, it will likely take poor August weather to break the recent range to the upside. That being said, there is not much room for error on the soybean balance sheet given the current estimates, which has likely led to the back-and-forth trade action as of late. 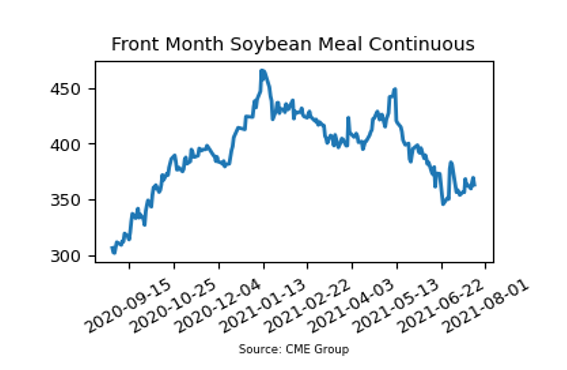 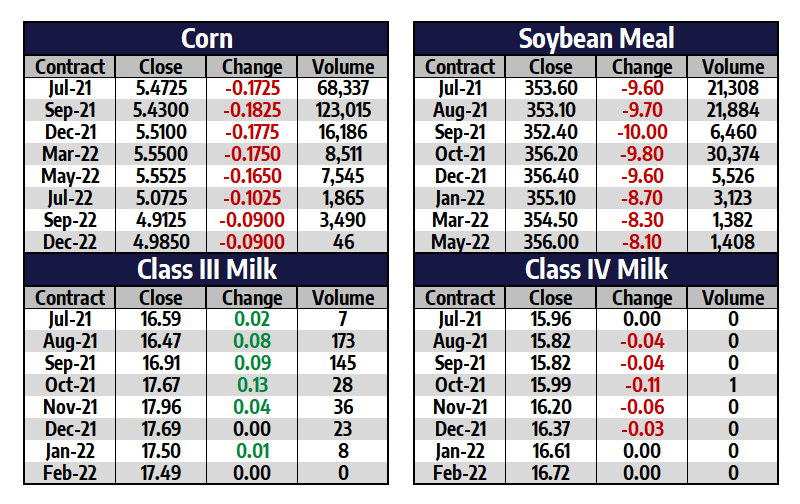