The class III milk market struggled this week as contracts weren’t able to add to last week’s strong gains. The second month contract fell 51c after rising $1.13 in the prior week’s trade. The October contract fell 64c after jumping 70c higher a week ago. The market ran into selling pressure stemmed from a weaker spot trade along with outside market weakness. The US Dollar Index hit a new high of year while the feed market is starting to struggle. For the spot trade, spot cheese was down 4.625c, powder was down 2c, butter lost 0.75c, and whey added 1.25c. The class IV milk futures market saw little price movement with few contracts traded. The second month class IV contract added just 4c to $15.91.

News this week for dairy included a Global Dairy Trade auction on Tuesday along with a USDA milk production report on Thursday. Both news events were friendly to the market. The Global Dairy Trade price index added 0.30%, which was the first up auction since April 6, 2021. This breaks a streak of eight red auction events. Within the event, the global butter price added 4% and the global cheese price added 2.80%. Additionally, the US milk production report for July showed just a 2% increase in production growth. Cow numbers declined for the second month in a row and are now 9,000 head off of this year’s peak. The 2.00% year-over-year growth was well below recent growth totals. 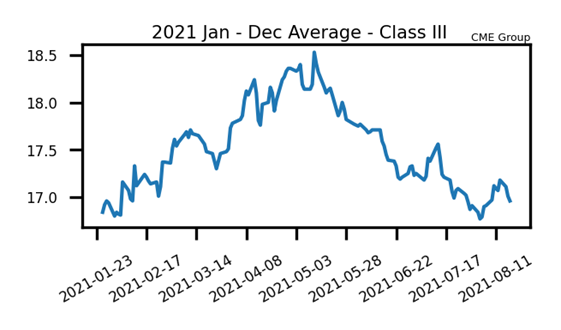 Feed costs are still high, but struggled this week and may add pressure to milk prices in the future

The bears took control of the corn market this week despite recent updates from the USDA falling in the bullish camp. The USDA said in last week’s Supply and Demand report that the corn yield fell about 5 bushels per acre from the July report to 174.60. They also said in this week’s crop progress report that corn conditions fell 2% in the good to excellent category from a week ago. Although despite all of this bullish news, the market continues to struggle. The September corn contract was down 29.50c this week and closed down at $5.3875 per bushel. Pressure may also be coming from the fact that there are rains expected in the Midwest and northern Plains over the next 7-10 days. The US dollar index is at 10 month highs. Also, China’s corn prices have started to decline a bit. 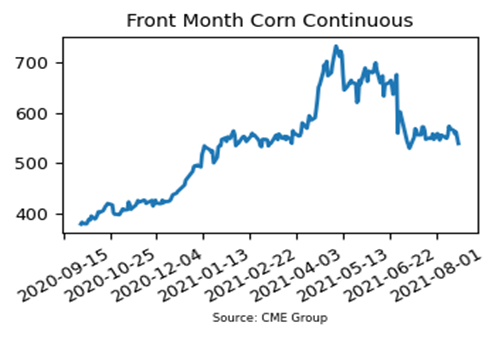 For the majority of the months of July and August, soybean meal prices have been stuck in a sideways trend between about $345 on the downside and $370 on the topside. That continued this week, as the September contract fell $4.30 per ton after gaining $1.80 per ton the week before. The contract settled Friday at $353.30. There have been 11 consecutive days of new export sales announcements to China and unknown and despite this, the soybean market has lost value. Crude oil is at 3 month lows and the Dollar is at 10 month highs – pressuring the soy complex. The fact that rains are expected in the northern Plains and the Midwest over the next couple weeks should help soybeans preserve their yields. 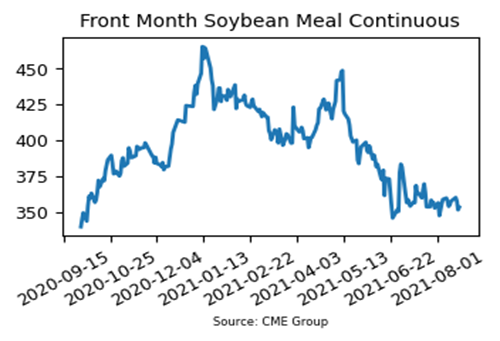 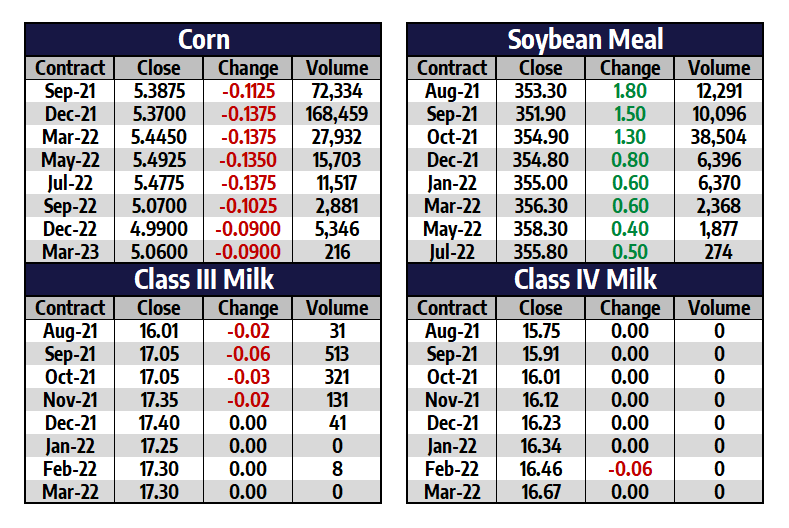