Class III futures were once again mixed but mostly flat to end the week. The second month October contract did manage to finish the week up 24 cents, unfortunately not putting a huge dent in the losses it took amassed in the two weeks prior, but an attempt at putting in a bottom nonetheless. Spot cheese was higher today but lower on the week, and the 34.25 cent premium of blocks over barrels still remains troublesome. Whey prices are also dead in the water for the time being, falling back beneath the $0.50/lb mark. For now, chart action will be watched for signs of a turnaround.

Class IV prices were higher once again today with the second month October contract pushing 20 cents higher to $16.60, totaling 29 cents higher on the week. Spot butter was up just a quarter cent today but gained 9 cents on the week to push back to just under the $1.80/lb mark. Spot butter has not traded in the $1.80’s since the last week in May. Powder prices were up 1.5 cents today to $1.34, the highest weekly close since October of 2014! It will take continued strength to get Class IV futures to sustain a move above the pesky $17.00 level, but the market is due for some upside strength after years of rangebound trade. 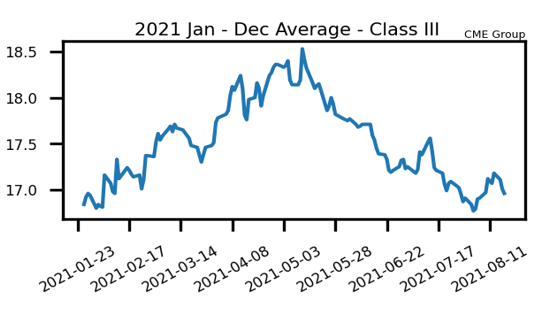 Cheddar blocks remain at a heavy premium to cheddar barrels

The December corn contract fell 29.75 cents this week, closing at $5.24 and bouncing off the downside trendline with a mid-week push to $5.1675. Hurricane Ida has caused some issue for grain shippers in the Gulf, and on top of that the market feels susceptible to normal seasonal pressure as harvest nears. As of now the bottom end of the range has held, and until there is a break out of the wedge that has formed on the charts it is tough to get too excitable. Next Friday will entail a supply and demand update from the USDA, and it is possible the market waits to see the numbers before determining direction. 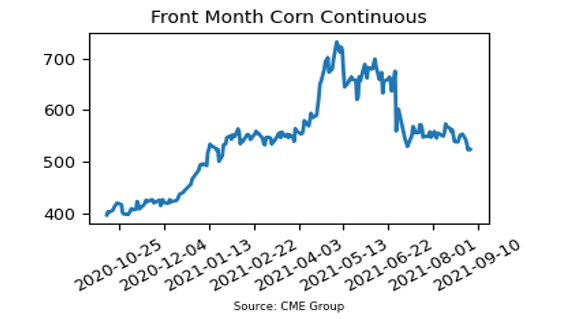 Soybean meal futures hit their lowest point this week since November of last year, led by a push in the October contract to $335.70/ton this morning before settling with minor gains. This totaled a weekly loss of $12.30/ton and the breach of the June low opens up the downside for additional selling. August weather was mostly friendly for soybeans, and it is possible the USDA will increase yield on next week’s report. For now, it appears the bears are in control of market direction. 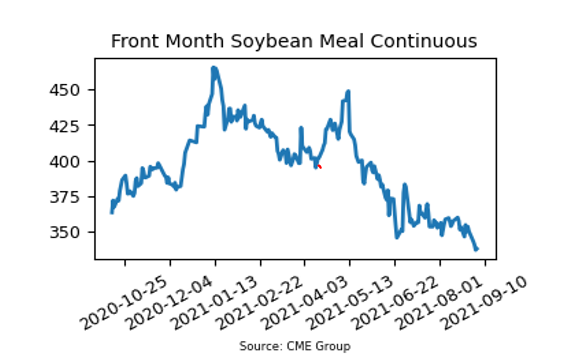 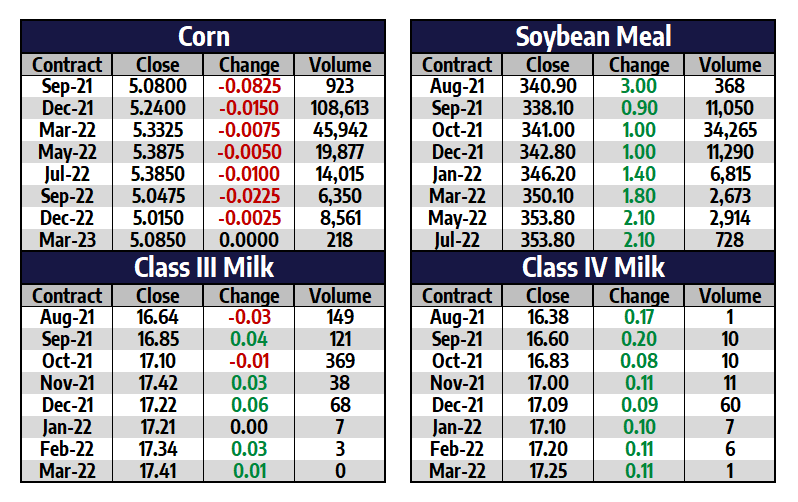