Spot Cheese Up Each Day This Week

Cheese buyers extended the up-streak in cheese to six days in a row as demand has been strong so far in September. This week, the spot cheese block price tacked on 5.50c, while the spot cheese barrel price gained 8.50c. The fact that the barrel price is gaining on the block price is bullish, as the wide spread is starting to narrow some. Despite this cheese market surging higher, the Class III market had a sluggish week of trade. Steady gains were seen in October milk (+49c) and November milk (+20c), but the further out contracts were neutral. The market may look for a catalyst elsewhere or may be waiting to see if this cheese rally has legs, or if it will fizzle out like recent moves.

The Class IV trade remains consistent in the fact that buyers are pushing the market higher. A recent multi-year high in US spot powder along with good gains in the Global Dairy Trade class IV product market has supported prices. The October ’21 class IV milk futures contract is currently $1.27 per hundredweight off of its July low. Current market movers for dairy include what the feed market will do over the next couple months, whether or not production growth can tighten, how slaughter rates look, and whether or not exports can keep the same pace. 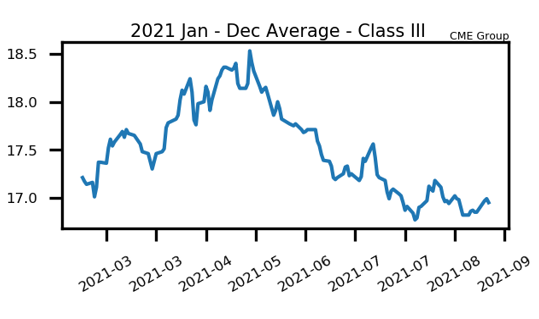 The cheddar block/barrel average pushed back in to the $1.60’s/lb

Non-fat powder traded to its highest level since 2014

Corn futures ended the week with the December contract holding a daily range of 26.5 cents on Friday, finishing 7.5 cents higher on the day following the release of the September WASDE report. The daily low of $4.9750 was the lowest the contract has traded since April, but prices rebounded back above $5.00 quickly and stayed there. For the week, the December contract finished down 6.5 cents but left a decent tail on the charts, suggesting some potential strength going forward. The Supply and Demand Report estimated the average corn yield to be 176.3 bu/acre, up 1.7 bu/acre from last month. 2021/22 carryout was posted at 1.408 billion bushels, up from 1.242 bb in August. Overall, prices held support at the close and therefore the recent range-bound action persists. 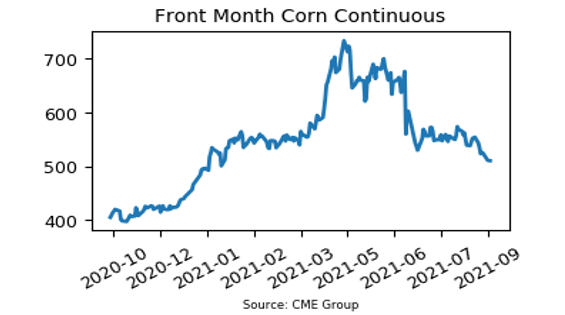 The October soybean meal contract closed out the week at $339.50/ton, up $4.40 on the day and $1.40 higher for the week. On the continuous chart, prices fell to their lowest level in almost a year this week after breaking the $340/ton level, but ended the shortened holiday week with three positive closes. Friday’s USDA Supply and Demand Report estimated the average soybean yield to be 50.6 bu/acre, up 0.6 bu/acre from last month. 2021/22 carryout was posted at 185 million bushels, up from 155 mb in August. The market has gotten to oversold levels and with soybean futures holding at recent levels amid growing production estimates, the recent downtrend pressure may be due for a breather in the short-term. 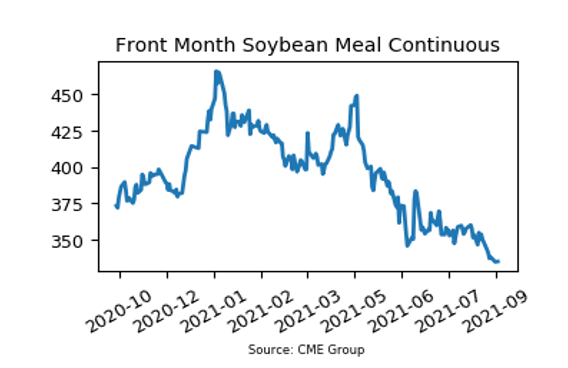