The October Class III contract closed up 3 cents Friday, but finished the week 16 cents lower. This comes up after hitting downward trendline resistance again last week, as the market still remains in the overall clasp of the lower trend that started back in May. The block/barrel average was up 1.75 cents on the week to push to $1.65125/lb, its highest level since mid-July. Spot whey prices were just half a cent higher on the week, but the head-and-should bottom formed over the last couple months may be a sign of strength to come. With the supportive trend in the spot markets, tightening of milk supplies, and solid export demand, there are reasons to be optimistic fundamentally. However, the technical action has left something to be desired, we are near the last couple weeks of the third quarter.

Class IV trade was slightly lower this week with the October contract falling 6 cents to $16.81. This was the first time the second month contract has finished a week negative in the last seven weeks, so some retracement lower may be due to happen after the recent rally. Spot butter prices were up a half cent on the week to trade to $1.79/lb, but did trade over the $1.80/lb mark early in the week to their highest point since May. Powder prices were slightly lower on the week, but are still near 7-year highs. These products continue to see strong export demand and solid GDT Auction prices, and this has brought the second month Class IV milk contract near long-term resistance at the $17.00 mark. 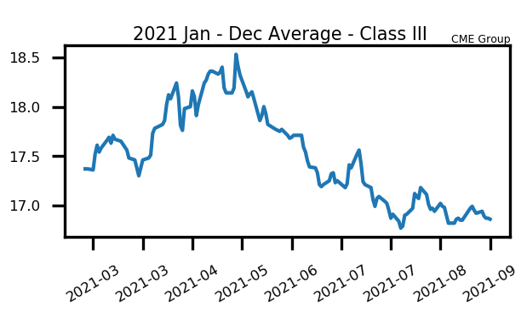 Non-fat powder closed the week on solid strength at $1.35/lb.

December corn futures closed 9-3/4 cents higher to finish the week at $5.27-1/4. Since the crop report last week Friday, December futures have bounced off of the 200-day moving average and sit just below key resistance. Resistance comes from the trend line that signified the bottom end of a pennant formation that December futures had been trading in for approximately three months. That trend-line was broken on September first and back-tested yesterday. Major support for December corn remains in the $5.00 range based on the lows from last Friday and May 26th. A close below that level could have the market headed towards $4.70 or possibly lower. Harvest results will likely determine the next leg up or down. Export sales for the week ending September 9th came in at 246,583 MT for the 2021 marketing year and 2,286 MT for 2022. This was well below expectations. Cumulative sales for the 2021/22 marketing year have reached 38.7% of the current USDA forecast compared to the five-year average of 24.9%. For now, December corn seems fairly valued near $5.00 given an estimated stocks to use ratio of 9.5%. 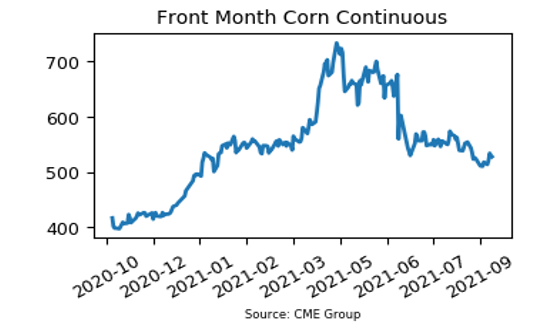 Soybean meal futures finished the week up for the second week in a row up $2.7/ton. This is also the second week in a row that the futures market has tested the 200-week moving average and found support. The United States posted a strong weekly export sales number for beans this week coming in at 1,264,200 metric tons. This was up substantially from last week and the previous 4-week average. There was also a daily flash sale posted on Thursday morning of 132,000 metric tons to China. Demand for U.S. beans from China will continue to be a frontline issue moving forward. Many are looking for the pace to increase as issues surrounding Hurricane Ida in the Gulf are resolved. With the price of Chinese soybean futures trading to new highs, it appears that there should be demand there. Early Soybean plantings have began in Brazil but the weather remains too dry for many. 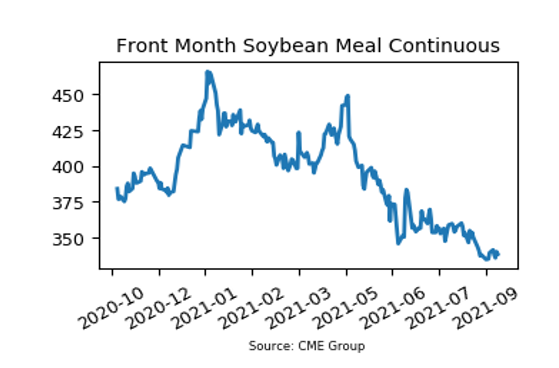 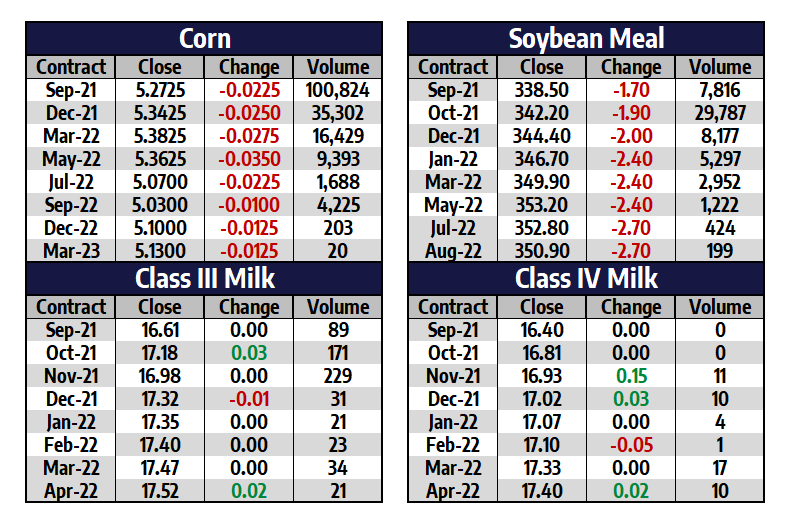