Class III futures were two-sided to end the week with the Q4 contracts lower and most 2022 contracts higher. The November contract was $1.08 lower this week, but still 27 cents higher for the month within a $2.08 range. While the volatility for the November and December contracts has been amped up, the 2022 average quietly crept higher this week with a close at $18.43. This is a 64 cent jump for the month of October and provides some good opportunities to start putting a floor under milk prices for the coming year. The block/barrel average has been disappointing since posting a new 2021 high on Monday, falling almost a dime since then to close at $1.7475/lb today. Barrels closed at a 14.50 cent premium over blocks which is the fourth largest premium of barrels over blocks in more than a decade. Whey prices tacked on 1.25 cents this week to move to $0.63/lb, continuing to be a positive force on Class III prices.

The Class IV market has now seen its second month contract close 12 of the last 13 weeks higher as the November contract pushed to $18.50 by Friday’s close. That makes for a 21 cent rally on the week and an impressive $1.15 higher for the month. Along with some technical follow-through after breaking to seven-year highs, the spot markets have remain supportive with spot butter pushing to $1.94/lb, an increase of 10.5 cents on the week and its highest level since early June of 2020. Spot powder prices were up 2 cents this week to close at $1.5575/lb, a new seven-year high. While both classes of milk continue to benefit from lower milk production, strong exports, and an overall inflationary theme for commodities, Class IV milk looks like it is poised to lead market direction for the first time in many years. 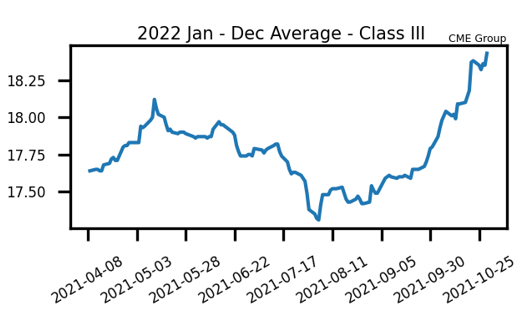 Corn futures didn’t post a single down session this week and finished with four up days in a row as the bulls took over. The market closed the week over important resistance levels, turning the short term trend back to up. Market talk is still centered around next year’s planted corn acres and what impact the higher fertilizer costs will have on that. Most feel corn acres will be lowered due to these higher costs. The next USDA WASDE report is on November 9th. There is talk that the USDA will likely raise ethanol demand. Some analysts think that the corn yield for 2021 could be raised by 1 to 2 bushels per acre, though. Corn exports are still down about 16% from where they were last year. 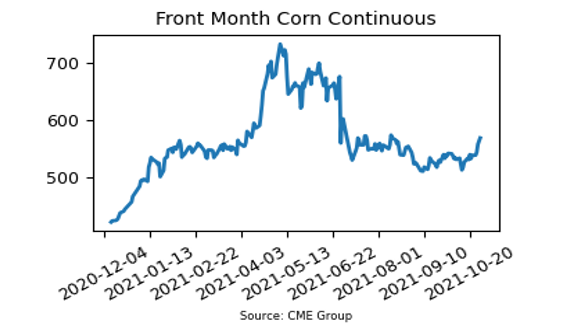 Soybean meal futures have finished higher in nine out of the past twelve sessions. The demand for the market has shifted noticeably over the past few weeks as the market works back to the topside. This week, the front month contract added $5.20 and closed up at $332.60 per ton – up from its October 13th low of $309.30. The market is expecting a slightly higher yield on the November 9th WASDE report with carryout close to 400 mb. Wet weather in the US is still being watched, as it could slow harvest completion. The soybean market is getting some support from the veg oils market. Malaysian palm oil prices were up over 2% in the overnight trade. 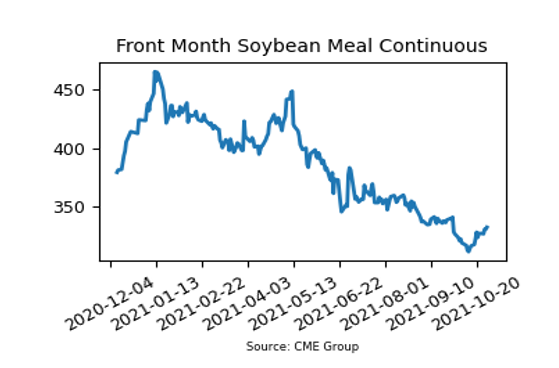 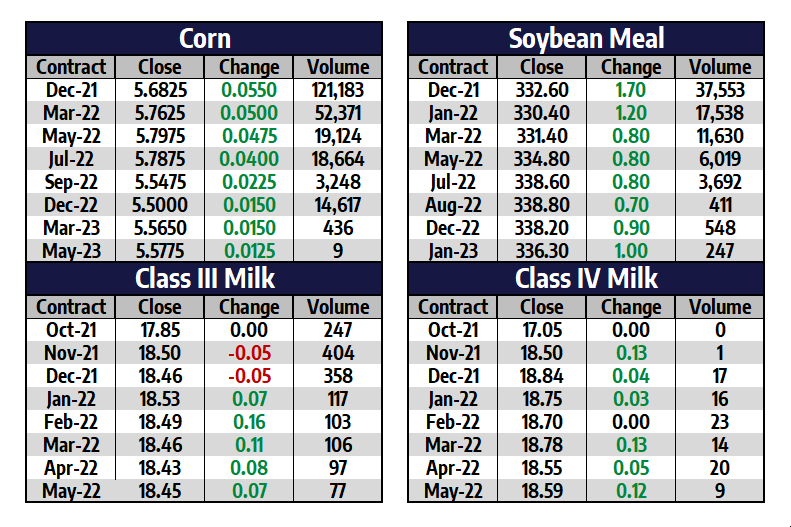