As the US spot cheese price continues to push lower, the Class III futures market is having a hard time finding support. The spot cheese block/barrel average has now closed red seven days in a row, as holiday premium continues to be taken out of this market. Cheese reports out of the Midwest cite that barrel cheese is getting harder to move, while block demand is still steady. This continued pressure in cheese is keeping Class III futures on the defensive. This week alone, December Class III has fallen 90c lower after falling 97c the week prior. Spot cheese has sunk back into the lower end of the range of prices it’s traded in so far this year. Class III is getting some support from a higher spot whey trade, though. Spot whey added 3c this week to $0.66/lb.

The Class IV market is still holding strong and the spot markets are near highs of the year. Spot powder added 1.75c this week to $1.57/lb while spot butter fell 0.50c this week and closed at $1.9350/lb. At the high of the week, butter hit $1.98/lb, just beneath the $2.00/lb barrier. With Class IV spot product demand still steady, futures are back up over $19 for the first time in years. Second month Class IV added 29c this week and closed up to $19.13. This is the December contract’s seventh up week in a row. There remains support from higher global levels for Class IV. With this week’s selloff, some nearby Class III contracts are approaching oversold territory. 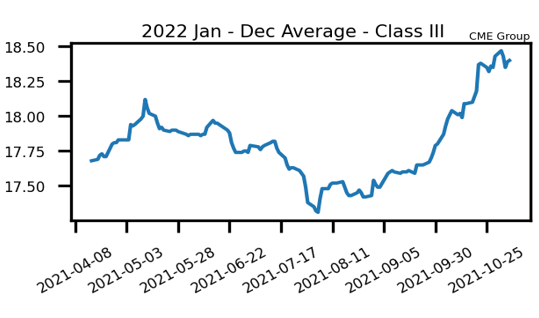 Reversal in Corn Prices this Week

After rallying more than 40 cents in the two prior weeks, the December corn contract fell 15.25 cents this week to fall back near the $5.50 mark, now testing a move back beneath the trendline it recently broke above. This was 33 cents off the high from Tuesday morning as the volatility has amped up with harvest entering the home stretch. The recent rally was mostly tied to ethanol strength, but the move back near $5.90 futures must have been overdone. Next Tuesday’s WASDE report will set the tone with ending stocks expected to remain near the 1.5 billion bushel mark, with most thinking both yield and demand could see an increase. Support at the $5.50 mark may hold until the release of the report. 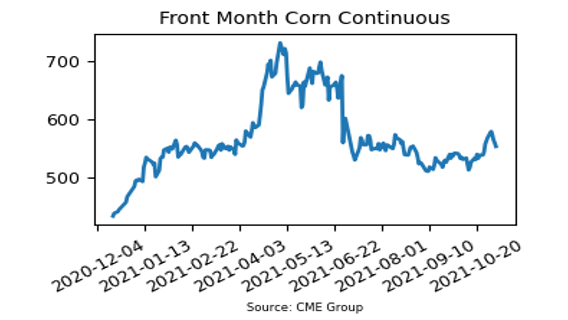 The December soybean meal contract closed the week just a dime higher than it ended October, closing today at $332.70. Price action had been mostly positive since the October 13 low was put in place, but seemed to run out of room with a move back above $340 earlier this week. Soybean ending stocks are expected to see a jump on Tuesday’s report and with non-threatening weather reports from Brazil, the fundamental picture looks a little bleak in the short term. That being said, the pivot off the low from a couple of weeks ago, mixed with the short-covering trend from managed money traders, gives credence to the argument that some solid bottoming action took place. 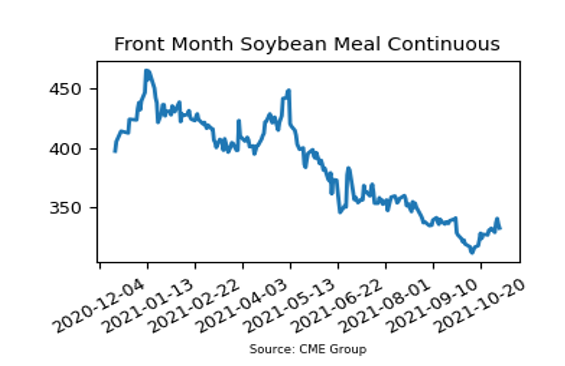 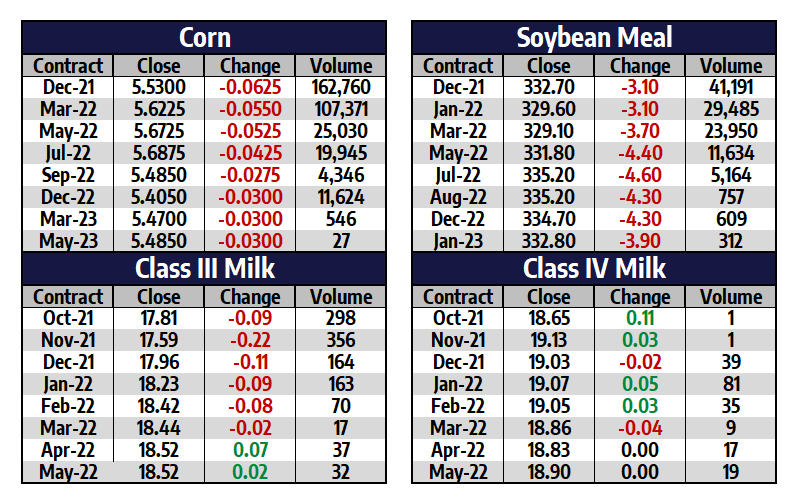