The second month Class III December contract was up 49 cents this week through Thursday’s close, but Friday’s trade gave almost all of that back with a 46 cent lower close. Spot cheese was down 5.625 cents today but still up 8 cents on the week. However, the block/barrel spread has widened back out to a 25.25 cent premium of blocks over barrels, moving back near an extreme level and representing a 39.75 cent swing from the recent inversion. Spot whey finished the week at $0.67/lb and is approaching its 2021 high from April 20th at $0.7025/lb, but milk prices have been somewhat ignorant of this market. The 2022 milk contracts remain strong with an average of $18.59 for all 12 months, up 20 cents on the week.

The Class IV market continues to hang in strong with the second month November contract falling just 2 cents this week, just the second lower weekly close for the second month contract in the last 15 weeks. Spot butter closed 1.5 cents higher on the week at $1.95/lb, which makes for three weeks in a row with a close between $1.93/lb and $1.95/lb as the market struggles to find buying beneath the psychological $2.00 mark. Power prices were down 2 cents on the week to $1.55/lb but remain near their recent seven-year high. The strength in the spot markets, highlighted by very strong butter exports, continues to support the Class IV market at levels it has not seen since 2014. 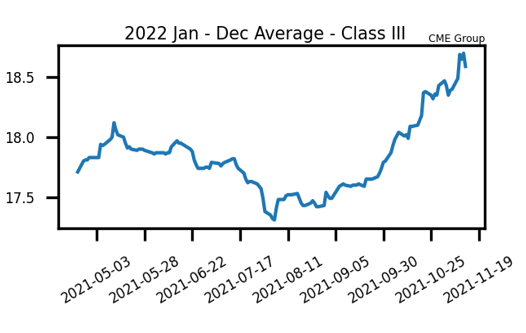 The corn market finished higher for four days in a row to close the week up a total of 24.25c at $5.7725 per bushel on the front month contract. The market was able to do this despite a bearish Supply and Demand report release on Tuesday. In the report, the USDA said that 2021 corn yield is pegged at 177 bushels per acre. This is a 0.50 bpa increase from the October report and was above market expectations. The USDA also raised corn world ending stocks to 304.40 mt versus market expectations for 300.80 mt. The market continues to rally due to support from a higher wheat trade, higher ethanol prices, higher fuel prices, and the thought that corn plantings could lower next year due to high fertilizer costs. The market rallied Friday from the fact that China corn prices are on the rise due to bad weather delays for crop shipments. South American weather remains beneficial, with Argentina now at 29% planted. 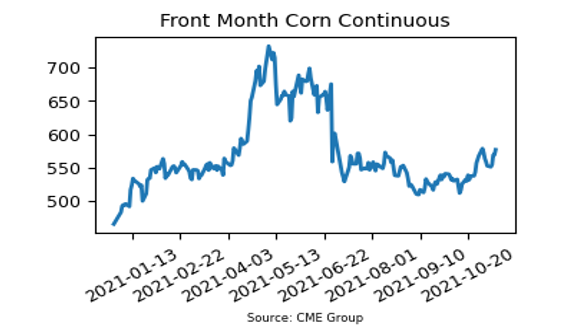 The soybean meal market jumped a whopping $17.60 per ton on Friday, pushing the December contract up to $362.10. This takes the market up $29.40 for the week and marks the fourth up week in a row for soybean meal. The soybean complex got good news in Tuesday’s Supply and Demand report, which said that 2021 US soybean yield would fall to 51.20 bushels per acre. This was down 0.30 bpa from the October estimate. The USDA also estimated world 2021/22 ending stocks at 103.7 mmt versus the expected 105.50 mmt. Conab reports that the Brazil crop increased to a record 142.01 M tons. US exports are still suspect, as they are down 33% from this time last year. China’s lack of buying and the effects from recent hurricanes are likely to blame for weaker exports. 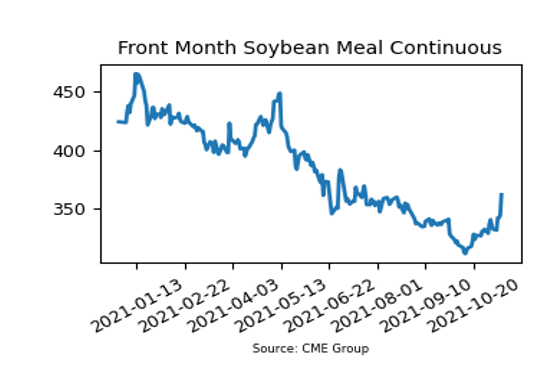 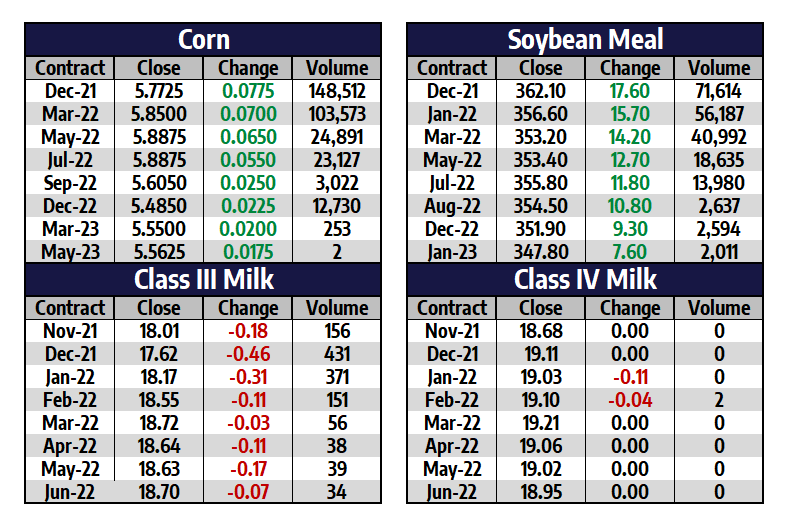