Class III futures exploded to the topside on Friday’s trade led by a $1.09 rally in the December contract. That contract closed 83 cents higher on the week, which adds to what has been a wild two months of back-and-forth trade. December futures moved from a close of $17.18 on September 23rd to a close of $19.64 on October 21st before shifting lower again, closing just two days ago at $17.15. All twelve 2022 contracts traded to new highs as well, with the yearly average closing the week at $18.97. The main catalyst was another bullish production report on Thursday, with October production down 0.50% from October 2020 and yet another drop in cow numbers, along with solid spot market trade with cheese appearing to find a short-term bottom. The block/barrel average was 6.5 cents higher on the week at $1.68875/lb, with spot whey up 3 cents to $0.70/lb.

The Class IV market was no slouch this week either, mainly thanks to Friday’s action. The second month December contract tacked on 34 cents today for a 36 cent gain on the week to push to a new high on the continuous chart at $19.47. All six contracts for the first half of 2022 closed at $19.50 today, with the overall average for the calendar year closing at $19.3875. Spot butter was finally able to break above $2.00/lb this week, closing at $2.0475/lb and up 9.75 cents on the week to push to a two-year high. Spot powder is sitting 1.5 cents off its seven-year high of $1.57/lb, closing up a half cent on the week at $1.5550/lb. Class IV milk should hold onto some momentum until something gives in the underlying spot markets, both of which are sitting at multi-year highs. 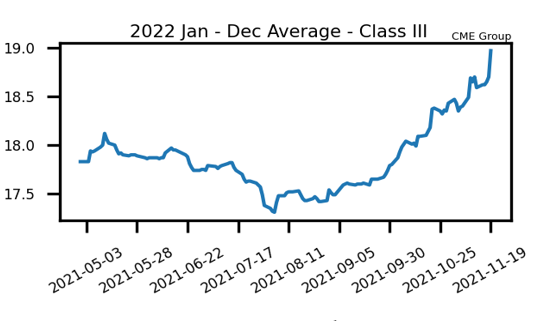 Corn futures finished up one of their quieter weeks in recent memory with the December contract dropping 6.5 cents to $5.7075. What stuck out this week is the amount of resistance the market is facing around the $5.80 mark. Out of the 15 trading days so far this month, the December contract has traded over $5.80 intraday on five occasions, but closed back beneath that point every time. That being said, prices have avoided a sell-off and are hanging in at strong levels. While demand news remains mostly bullish, the higher dollar and a solid start to planting in South America may cancel out some of that optimism. 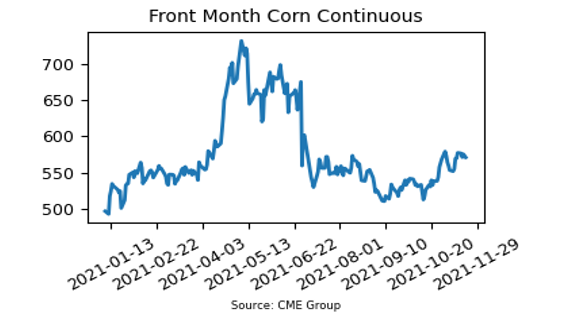 The December soybean meal contract has strung together five weeks of gains in a row, up $9.70/ton this week and more than $60.00/ton higher from the low from October 13th. Futures look like they may have put in a longer-term low at that time from a technical standpoint, although the fundamental news may limit the upside momentum. With soybean ending stocks now comfortably back over 300 million bushels and our South American competitors off to a beneficial start to their planting season, a move back near $400/ton may be an uphill battle. 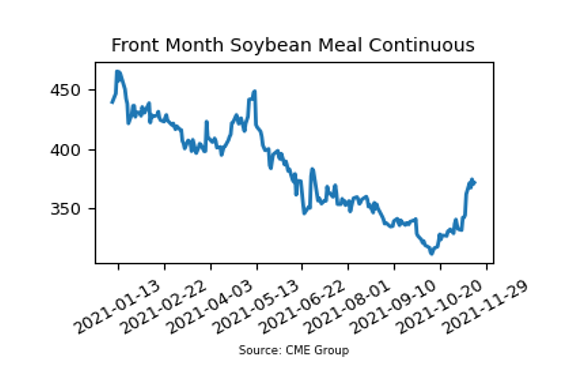 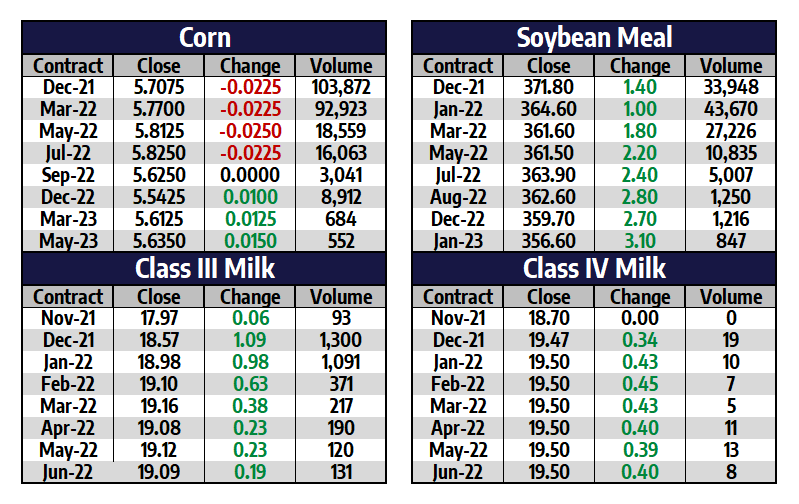