January and February 2022 class III milk futures posted a down week this week as cheese sellers pushed the market about 5c lower from Wednesday to Friday. The cheese price just can’t gain enough momentum to push higher and now is back within the range it’s been in all year. Cheese still hasn’t made a new high for the year since October, despite the fact that class III is knocking on the door at $20 per cwt. With cheese back near $1.75/lb, fair value for class III milk is much lower than current levels. The market is still getting support from expectations for lower milk production, lower cow numbers, high feed costs, and a roaring class IV trade. However, if the market doesn’t see another catalyst soon, the class III trade could be due for a correction lower.

This is why next Monday’s milk production report is so important. The report from October showed cow numbers down for the fifth month in a row along with production down 0.50% from the same month last year. Should November show similar numbers, it would be the first time since 2019 that US milk production has tightened two consecutive months. Additionally, the fact that cow numbers are now below where they were last year is bullish. Should we see another cut in cow numbers for November, it could produce more buying in the market. The report is due out next Monday at 2pm CST and will likely have a large impact on which way this market breaks moving forward. 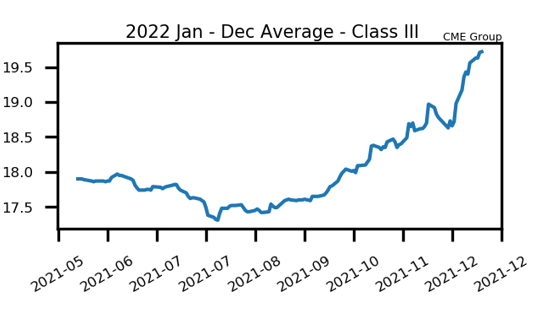 The March corn contract traded within a 17.25 cent range this week, closing 3.25 cents higher at $5.9325. This is the highest close for the front-month contract since the week of July 6. Although, the action today left a little to be desired for corn bulls as futures closed 6.50 cents off the daily high of $5.9875. It has been more than five months since corn has seen a $6.00 handle and the current concern regarding a dry weather forecast for production areas in South America has kept buyers active. Essentially, the market has flatlined near the $5.90 mark and is looking for a spark to break out of its rut. Futures remain over-priced vs. the USDA’s stocks-to-use ratio, but the funds have been reluctant to lighten up on their large net long position just yet. 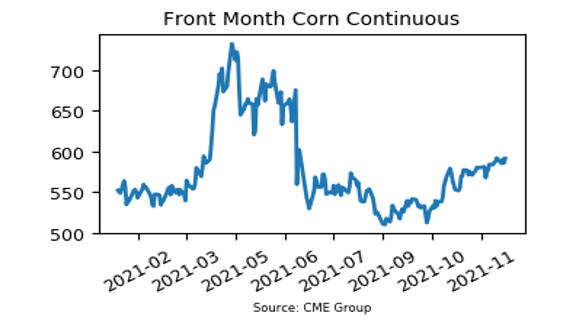 Soybean meal futures kept their recent upward momentum going with a strong week that saw the January contract close $12.70/ton higher, thanks in large part to a $7.20/ton jump on Friday. The soybean complex, in general, found buyers today linked to a dry two-week forecast for our Southern Hemisphere counterparts. The front-month SBM contract is right around the peak from mid-November, so next week will be important technically to see if prices fail around $380.00 again or can make another run near $400.00. Soybean meal sales have cumulatively hit 44.5% of the USDA forecasts for the 2021/22 marketing year, just beneath the 5-year average of 45.2%. 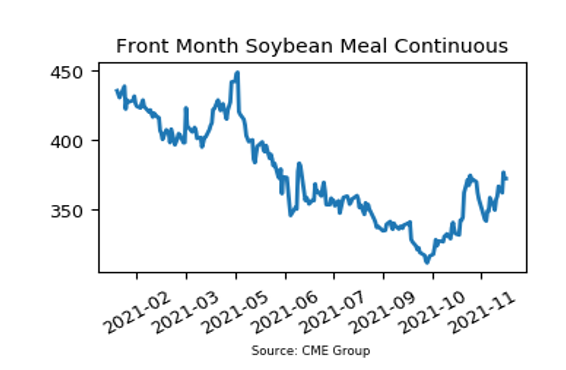 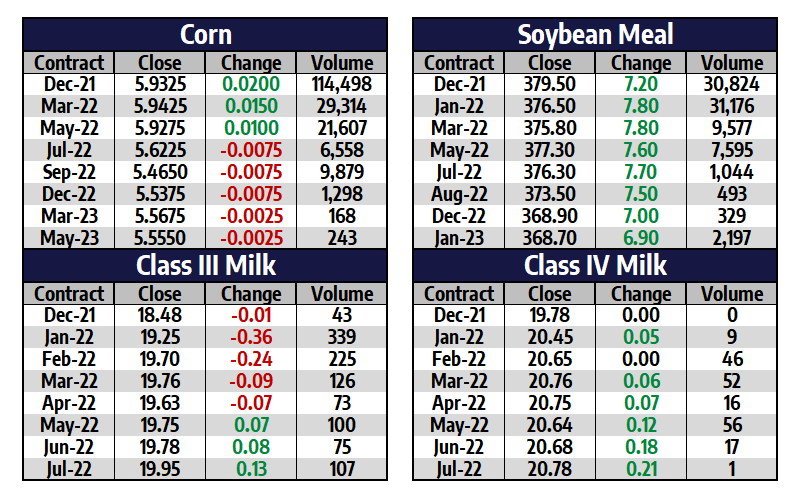