The crude oil market has been in focus for the commodity space recently and this morning, traded to its highest level in seven years.  On overnight and early session strength, August crude oil futures traded to $76.98 a barrel, eclipsing the high established in 2018, and reaching a price point not seen since 2014.  The lack of progress in the OPEC, and other oil producing nations meeting going into the weekend, helped push oil futures to those multi-year highs.  The group was unable to meet an agreement on production goals, which should keep the oil supply/deficit levels in the red going into the later parts of summer.  This should keep price supported, with talk of $80 oil or better on the table.  Prices did see some profit taking off the session highs on technical selling, but with the supply picture demand still strong, there is room for oil prices to push higher overall. 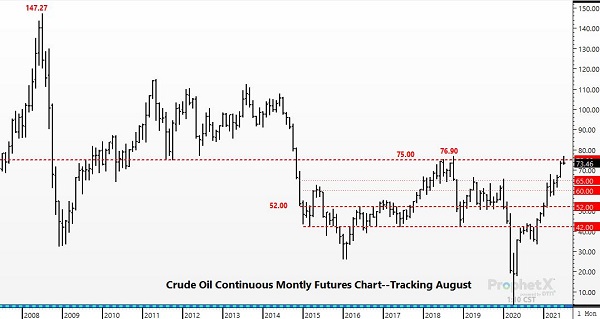 CORN HIGHLIGHTS: Corn futures wasted no time plunging limit lower on an improved forecast for the northwestern regions of the Midwest, as well as better than expected rains in that same region over the last 24 hours. The extended forecast for more rain and moderate temperatures for majority of the crop growing areas approaching pollination will keep the crop in good shape. By day’s end, September corn finished limit lower (40 cents) at 5.52 and December also limit lower at 5.39-3/4. Futures for December closed at 5.48-1/2 the day prior to the Stocks and Acreage reports.  Moving forward, we will mostly quote September as the front month, as cash bids will likely be reflected based on this contract. The last trading day for July futures is the 14th, two days after the WASDE Supply and Demand report is due for release. Despite favorable reports last week with lower-than-expected acreage and stocks, prices plunged regardless, as it appears today’s trade was mostly liquidation. Time of year has a big part to do with this as well. Usually, if prices are at a higher level, the 4th of July is viewed as a turning point.  While it is tempting to exit long call options, we will hold these for the short-term anticipating that weather forecasts may change. Considering how dry much of the western half of the corn belt is, a warmer and drier July or August could be much more important to the crop than warm and dry in June. Export inspections at 48.7 mb were termed supportive bringing the year-to-date total to 2.289 bb and 80.3% of expected sales of 2.850 bb.

SOYBEAN HIGHLIGHTS: Soybean futures were under heavy selling pressure today due to a more production-friendly forecast for moisture later this week and weekend rains, especially in parts of the Dakota’s and Minnesota. August soybean futures closed 89 cents weaker at 13.44-1/4 and November down 94 at 13.05. Heavy selling in many commodities may have also contributed to losses today along with soymeal losing over 25 dollars per ton and soybean oil dropping near 300 points. The dollar firmed late in the session and energy prices posted key negative reversals. It was a difficult session for the bean market which was comprised of what appeared to me most long liquidation. The key for soybean prices is the most recent forecast which offers much of the western corn belt as well as the northwest regions of the Midwest a very substantial chance for meaningful rainfall of one to three inches in most areas. With high heat engulfing this region for an extended period rain will be beneficial but one does have to wonder if some crop potential has already been lost. It is highly likely that corn in these areas will not yield what it could have. Beans could be a different story. if the plant hangs on during June, we do wonder if they can make it up in July or September. Some private analysts are reducing the crop size by reducing yield from 51 to 50 bushels an acre. If that is the case it implies projected carry out, without changes in demand, could now potentially be well beneath 100 million. Again, for the second time in recent weeks, it looks like the market today removed the majority of weather premium for new crop.

WHEAT HIGHLIGHTS:  Sept Chi down 26 3/4 cents at 6.26 & Dec down 28 cents at 6.33 1/2.  Sept KC wheat down 35 1/2 cents at 5.83 3/4 & Dec down 34 1/2 cents, closing at 5.95 1/2. An ugly day across all three wheat markets today, traders pushed MNPLS wheat the hardest today, with September posting a 45 1/2 cent loss, closing at 7.93 1/4. Today, the market traded rain and reacted as if this system of moisture is enough to fix all the woes of the current crop.  Over the weekend, parts of the northeastern Plains did receive some rains and may see more this week. However, the northwestern Plains are still expected to stay dry and extremely hot this week.  Spring wheat crop ratings came in at 16% good/excellent versus 20% last week. North Dakota’s spring wheat rated 50% poor/very poor, South Dakota’s rated 61% poor/very poor, and Washington rated 67% good/excellent. Winter wheat harvest progressed to 45%, but still behind the 5-year average of 53%.  Wheat inspections last week were 258,438 mt versus 285,654 mt last week. Egypt recently bought wheat, both from Romania & Russia, which again, is still bearish for US exports.