Projections are based on a survey of six analysts conducted by Bloomberg News on Nov. 11-14.

The National Oilseed Processors Association is scheduled to release its monthly report on Nov. 15.

In week ending Nov. 10, according to the USDA’s weekly inspections report.

Following is a summary of USDA inspections for week ending Nov. 10 of corn, soybeans and wheat for export, from the Grain Inspection, Packers and Stockyards Administration, known as GIPSA.

Private analytics firm IHS Markit Agribusiness, part of S&P Global Commodity Insights, on Monday projected an increase in U.S. corn plantings for 2023, according to portions of an IHS client note seen by Reuters.

IHS Markit forecast soybean plantings for 2023 at 88.515 million acres, unchanged from its October forecast but up from the 87.455 million acres seeded in 2022.

IHS Markit cut its U.S. 2023 all-cotton plantings forecast to 11.200 million acres, down 1.9 million acres from its October forecast and down from the 13.791 million total cotton acres that U.S. farmers planted in 2022.

This compares with 57% a week earlier, and 78% a year ago, according to an emailed report from consulting firm AgRural.

China’s soybean production has hit a record high this year, with an expansion of the planting area and rising yields, Yang Baolong, president of the China Soybean Industry Association, said on Thursday at an international conference on oilseeds and fats.

Soybeans are an important feed crop as well as grain and oil crop in China.

In recent years, the country’s total demand for soybeans has continued to climb, while the planting area and scale has been limited, so it is imperative to enhance the production capacity for soybeans, Yang said.

At the same time, amid global uncertainties including the Russia-Ukraine crisis, international soybean prices have continued to rise. In order to ensure national food security, China is accelerating the domestic production of soybeans and reducing dependence on imports.

According to the Ministry of Agriculture and Rural Affairs, domestic soybean production in 2022/23 is expected to reach 19.48 million tons, an increase of 18.8 percent year-on-year.

Russia is expected to agree to extend a United Nations-brokered deal allowing exports of Ukrainian grain and other farm products from the Black Sea, ensuring a vital flow of foodstuffs to the world market.

Russia is likely to allow the deal to renew after its Nov. 19 expiration, according to four people familiar with the situation, all of whom spoke on condition of anonymity to discuss matters which aren’t yet public. They didn’t specify whether Russia would seek to add new conditions in return for the extension or any other details.

A spokesperson for the joint body administering the deal from Istanbul said there’s nothing to confirm or announce at this stage. Kremlin spokesman Dmitry Peskov said Russia will disclose its decision “in due time.”

Wheat futures fell as much as 2.1% in Chicago on the news. Paris wheat futures also dropped to the lowest since September.

The original pact, struck in late July with Turkey and Ukraine, revived seaborne exports from Ukraine after Russia blockaded the country’s ports following its invasion. It was brokered by Turkey and the UN and signed for an initial 120 days, which are due to run out Saturday. The deal provides for automatic extension for another 120 days unless one of the parties decides to pull out or modify it.

In tandem with the original agreement, the UN pledged to help ensure unimpeded exports of Russian food and fertilizers.

Russian Foreign Minister Sergei Lavrov, speaking after Group of 20 meetings in Bali, said the UN pledged that his government’s conditions for a deal would be met. Those include making sure Ukraine doesn’t use the export corridor for military purposes, enabling Russian grain and fertilizer shipments, allowing state-owned Rosselkhozbank to work in full, and “normal” insurance rates, he said.

The UN cited written guarantees given by the US and the European Union that they would provide “signals” to companies involved in the trade they won’t face sanctions risks, Lavrov said.

President Vladimir Putin had complained that the deal didn’t do enough to ease exports of Russian grains and fertilizer, even though they aren’t subject to sanctions and shipment volumes rose. He also argued that the supplies from Ukraine weren’t going to the poorest countries, although the UN had said the goal of the agreement was to lower prices by boosting supplies to the global market.

Ukraine has shipped more than 10 million tons of crops through the Black Sea since the deal came into force, led by corn and wheat cargoes. The grain has headed across Asia, Europe and Africa, including some cargoes chartered by the World Food Programme, the UN’s food-aid arm.

Last month, Russia briefly suspended its participation the deal, but after the UN and Turkey vowed to continue anyway, resumed observing it. On Monday, Peskov, the Kremlin spokesman, said talks last week in Geneva with the UN on extending it were “rather constructive,” but declined to comment on whether the deal would continue.

Ukraine said earlier this month that it was optimistic the pact would be extended.

Russia’s grain exports have been accelerating amid a bumper crop, while Ukraine’s shipments had slowed due to uncertainty over whether the deal would be extended.

India’s state wheat stock halves from a year ago

Indian wheat stocks held in government warehouses were half the level of a year ago on Nov. 1, government data showed on Monday, but inventories were marginally higher than the official target.

Wheat reserves in state stores totalled 21 million tonnes at the start of this month, down from 42 million tonnes on Nov. 1, 2021, but still slightly higher than the official target of 20.5 million tonnes for the quarter ending Dec. 31.

Lower state reserves could hobble the government’s efforts to release stocks to cool wheat prices, something it does regularly for bulk buyers such as flour and biscuit makers.

Wheat prices have surged in India despite the world’s second biggest producer of the grain implementing a ban on exports in May as it was stung by a sudden drop in crop yields.

Market arrivals from the previous harvest, meanwhile, have slowed to a trickle as farmers run down their stores.

Indian wheat prices are expected to remain elevated until the new-season crop arrives on the market early next year, growers and traders say.

If weather conditions remain favourable and temperatures do not rise abnormally during March and April’s harvest, India’s wheat output could bounce back to 2021’s level of 109.59 million tonnes given the good start to the planting season.

Indian farmers have planted wheat on 4.5 million hectares since Oct. 1, when the current sowing season began, up 9.7% from a year ago.

India is also weighing dropping a 40% tax on imports.

Ukraine has exported almost 15.1 million tonnes of grain so far in the 2022/23 season, down 30.6% from the 21.8 million tonnes exported by the same stage of the previous season, agriculture ministry data showed on Monday.

Grain exports have slumped since Russia invaded Ukraine in February and closed off its neighbour’s Black Sea ports, driving up global food prices and prompting fears of shortages in Africa and the Middle East.

Three Black Sea ports were unblocked at the end of July under a deal between Moscow and Kyiv that was brokered by the United Nations and Turkey.

The government has said Ukraine could harvest between 50 million and 52 million tonnes of grain this year, down from a record 86 million tonnes in 2021 because of the loss of land to Russian forces and lower yields.

Bayer AG’s BAYGn.DE agriculture unit in Brazil expects that its new genetically modified (GM) soybean Intacta2 Xtend will account for about 10% of the country’s total soy planting area in the 2022/23 harvest, the firm told Reuters.

The Intacta2 Xtend soybean, which tolerates the Dicamba herbicide and is resistant to insects, could be sowed in an area of around 4.3 million hectares (10.6 million acres) in 2022/23, compared with 243,000 hectares in the previous crop-year.

The expected expansion of the third generation soybean seed technology will follow after the seed was “tried and tested over the past two years in more than 500 areas across Brazil,” ensuring high yields, with dozens of producers recording averages of 100 60kg-bags per hectare, according to Bayer.

“Three digits in soybeans has always been a desire that very few farmers achieved in very small areas … such a significant number of customers surpassing this mark is confirmation that we are on the right track,” said Mendes.

The yield would be almost double that of Brazil’s average, estimated at 59 bags per hectare, according to the country’s food supply agency Conab.

The United Nations General Assembly on Monday called for Russia to be held accountable for its invasion of Ukraine, approving a resolution recognizing that Russia is responsible for reparation in the country.

The resolution, supported by 94 of the assembly’s 193 members, recognizes that Russia must be held accountable for violations of international law in or against Ukraine and “must bear the legal consequences of all of its internationally wrongful acts, including making reparation for the injury, including any damage, caused by such acts.”

General Assembly resolutions are nonbinding, but they carry political weight.

As per the Solvent Extractors Association of India (SEA), in 2021-22 year, the country’s imports picked up gradually in the first two quarters, however, slowed down in the third quarter but gained traction in the fourth quarter.

SEA highlighted that the fourth quarter witnessed an upside due to the lifting of the ban on palm oil by Indonesia and a steep downturn in international prices — which bolstered buying from India.

The report also cited SEA that in March-April for a brief period, palm oil was as expensive as soft oils. Its availability was further affected in May-June by Indonesia’s decision to ban exports. As expected, India’s palm oil buying plunged and the import of soft oil rose. Thereby, there was a drop in palm oil import at 79.15 lakh tonnes during the 2021-22 oil year — as against 83.21 lakh tonnes in the previous year, on the other hand, soft oil imports increased to 61.15 lakh tonnes this year — compared to 48.12 lakh tonnes in the previous year.

Brazilian biodiesel production, use expected to decline in 2022

US Autumn Fertilizer Application Ramps Up With Needed Rainfall

With the harvest winding down, US farmers focused on applying fertilizers in early November. Potash, phosphates and ammonia moved to fields in parts of the Corn Belt, and recent rains should open up more drought-stricken areas. CF is canceling its ammonia contract with Mosaic to capture higher prices.

A strengthening pulse of the Madden-Julian Oscillation may increase the likelihood of monsoon conditions developing in the southern hemisphere, Australia’s Bureau of Meteorology said 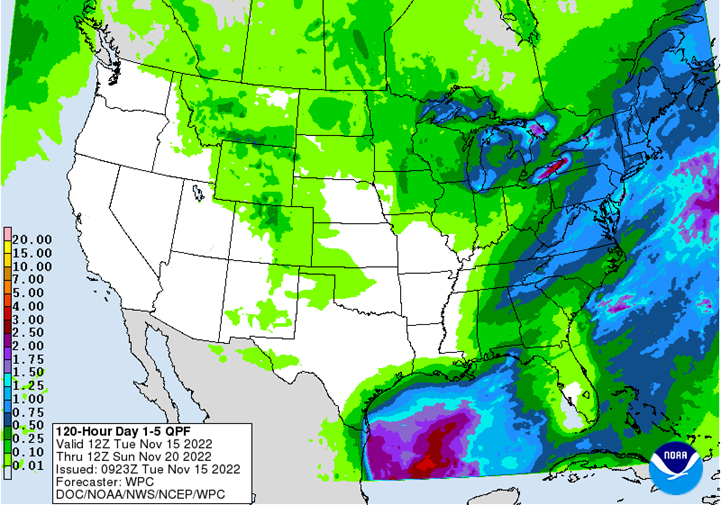